So – years ago I bought a TV capture box. A relatively nice one. A Miglia Evolution TV. All brushed aluminium and shiny. They went bust, and so software support was discontinued with OS X 10.4.

…which means that for all its shiny shiny, it doesn’t work. At all. Current versions of OS X don’t know how to talk to it and won’t let you even install the drivers.

So I bought a cheap USB capture device from t’internet.

Because, y’see, back in days of yore when this was all fields, and so on, there was an actual incompatibility between videos sold in the US and those sold in the UK. UK VHS videos were PAL – 625 glorious interlaced lines at 25 frames per second, and US ones were a somewhat lower res 525 lines, but a slightly faster frame rate of 30 frames per second.

Now, in the grand scheme of things, I largely don’t give a monkeys. At this point in history nearly all video cassettes have been consigned to landfill or plastic recycling. However, I’ve four cassettes – and actually a fifth containing a film that shows no signs of coming out on DVD – that I’d like to capture.

So I found a spare old tape to test it with and after freeing the motors off a little cerchunky-whirry:

Then I had to find the video cables for it. Because it uses SCART, which is a wildly convenient standard if you’ve got a SCART cable going into another SCART device. Less so if not. But, today I located (in the bucket of wires) my SCART to S-Video adaptor cable.

Because I can’t get the tracking good enough for the crappy cheap USB capture stick. If I plug the video into the telly it’s VHSarrific. A bit wobbly, in the way that VHS sometimes was, but not unwatchably so. And fuzzy, in the way that I’d forgotten how bad VHS was. But otherwise… it works.

Plug it in to the capture card and it is unwatchable. 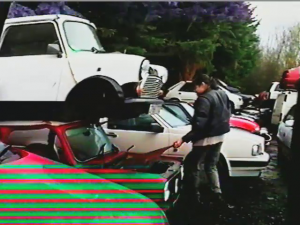 Imagine that high quality image flickering about all over the shop. It’s dreadful.

Now, the question is, is this something that possibly a better video recorder (like lovely John has) might fix, or is it something that is a sign of such a flawed USB capture stick that it won’t work even then.

Hopefully we shall find a solution. Not, of course, that I’m sharing this wonderful Promo that Nikki and I made for Granada. Oh no. Although, it’s quite entertainingly bad.