I know, it’s a rarity. And is anything ever really finished? I mean… time breaks all things, so there’s always and eventually going to be a repair.

But in this case – the project in question is my Sharp RP-119 that has sat mouldering in our garage for a while. I picked it up as a duff’n off ebay because, well, mainly because I wanted one. I mean I wanted something in the double sided record deck arena with drawer loading and general ridiculousness. Since we have a vertical loading CD player, it makes sense that we should have a record deck that loads into a drawer.

Anyhow, I’d wanted one for a long time. Originally I wanted a laser record deck, not least because when I was a kid I asked my dad if such a thing was possible after he explained how CD players worked, and we concluded it was easily possible… and then they appeared in the world… But I discovered that apparently they are a nightmare (beyond the fact they’re waaaay too expensive for me, even broken). Then I heard about these – the double sided record decks that came out just as vinyl was preparing for its temporary dodo phase.

Unfortunately, they were also in general a bit rich for my blood. The deck we’ve got at the moment, my beloved Technics SL-6 cost a shade over $50, although somewhat more now it’s been serviced a few times. I think I ended up paying a little more for the RP-119, but not, I don’t think a lot more. It was however pretty foxed. When I got it, the gear that drives the drawer had broken (a standard fault) and the belt drive was completely rotted into sticky unpleasant goo, the platter was stiff and the tone-arm belt had perished.

My last but one attempt to fix it I documented here, which ended with it sounding dreadful, and the drawer being inconsistent about opening or closing. But since then I’d actually stripped it down a second time to try and get the platter better lubricated. Having done that, when I reassembled it, the platter was better but the bloody thing wouldn’t open the drawer more than an inch.

It needed some other bits doing, too, so I left it for a while my enthusiasm having died a bit of a death. Then yesterday I messaged my local audio repair place to ask if they could fix it because we have another record that we can’t play on the SL-6. Turns out modern coloured vinyl is frequently a bit warped, and the SL-6 won’t play anything that’s not basically perfectly flat. Worse, it turns out that you (apparently) can’t flatten coloured vinyl, so when, say, you get the last copy of a record-store day only release, and it’s on coloured vinyl, and there’s no download code. You might find that you can’t listen to the bloody thing at all.

So, I’m hoping that the RP-119 might be slightly more tolerant of slightly warped records.

Anyhow, I messaged them – the repair folks – who were very sweet, but said no. They said that these kinds of decks are basically a lot of hassle to get set up and the amount of time isn’t worth it. Which made me sad and somewhat dispirited. So I decided to tackle it again today. First up I decided to replace the horribly aged and damaged power cable, and at least the vast majority of the corroded and unpleasant audio cables.

Adding a couple of new holes to the back I slotted in two new gold plated phono connectors. Slightly ridiculous because the cable inside the player is still the horrible oxidised one, I just made it much shorter and soldered it on. Then I enlarged the hole for the mains cable and replaced that with a nice figure 8 lead.

Being as I was feeling like I was on a roll, I checked the platter and hooked it up to a speaker… and sitting for a bit with lubricant seems to have finally freed it up. It didn’t sound like warbly garbage. The speed was way off (and is still, I need to print off some strobes to reset it, annoyingly).

But that just left the drawer, which was driving me batty. And then I saw it. Then I saw the little microswitch that didn’t seem to be touching anything and I twigged that it was twisted. Which mean that it was more or less always touching one of the contacts – and possibly could touch both of them. That meant that the poor wee beastie wouldn’t know whether the drawer was fully open or not, and would probably thing it was closed far too early.

With just that one screw to remove, I took it out, futzed with it until it was pretty close to its original position (I’m guessing I made whatever damage it had worse when I was pulling the drawer out to lube the platter, but that it was already not quite right because it started off not working properly). At any rate, it now more or less seems to be working: 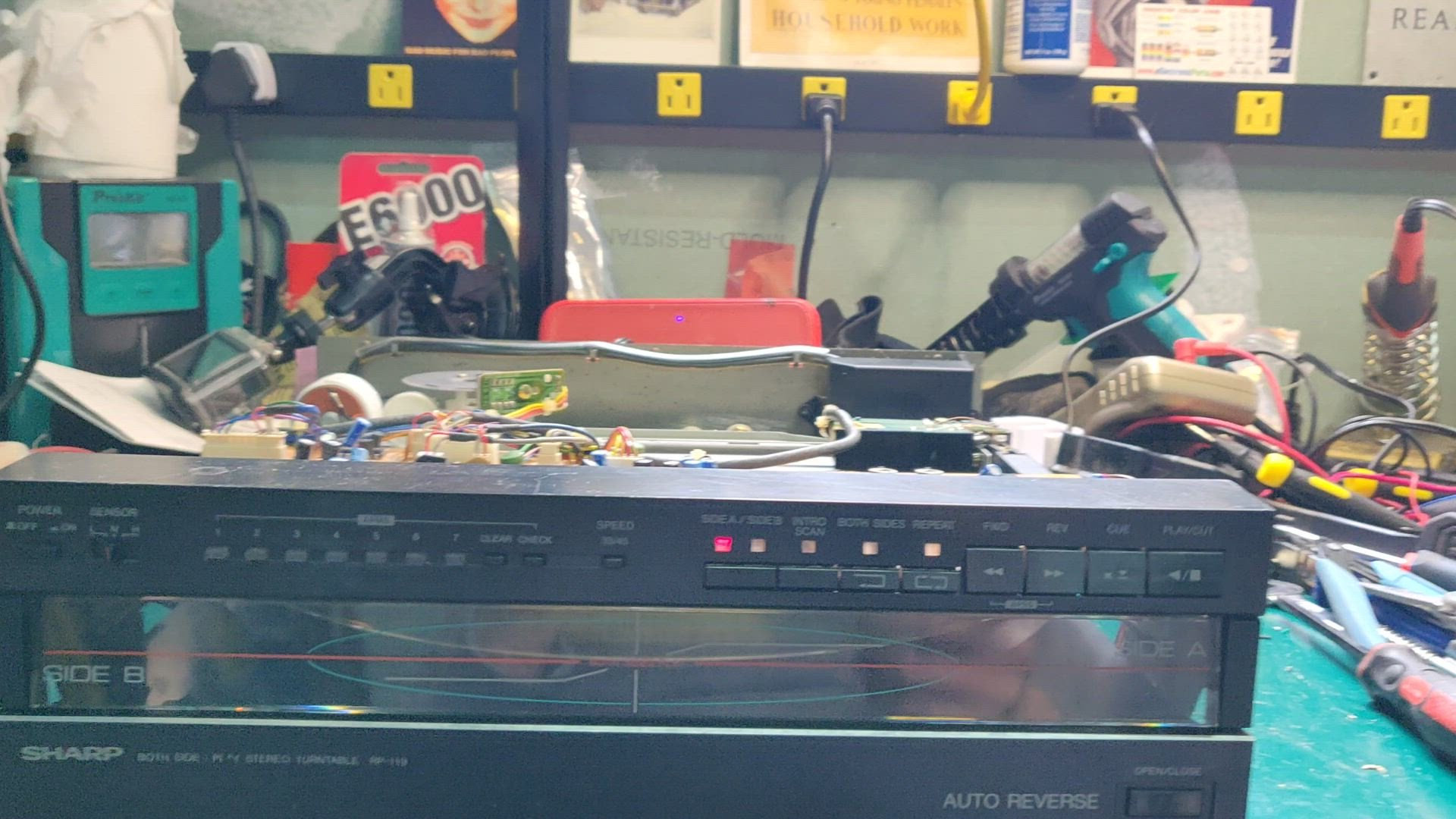 So I’ve finally ordered the new styluses for it. Side B’s sensor seems a bit… less reliable. I’m guessing it’s probably full of dust, so I’ve also ordered a new air-duster (since my last one’s run out). I’m hoping then that it can go back into service and be entertainingly weird as a way to play records.