Life continues to be more or less the same as it ever was. I’ve been working, at least intermittently, and I’ve even been paid. That has been rather nice, although it’s led to a bit of a flurry of spending as I’ve taken a bunch of stuff off the ‘want list’ which included several things that I’d decided I wouldn’t buy until we got to the US.

I’d been holding that restraint for a couple of years. Adding in the last 3 months of me not buying pretty much anything (I bought a few books, and a few items for our business) and then say “look, you’ve been paid”. I snapped. Much of this is ‘fun’ stuff, but the other thing that’s sucked up funds is things like ‘UK to US’ plug adaptors (10 of ’em, on the way). I’d thought I’d replace the old UK plugs with US ones, but bare US plugs are actually ridiculously pricey, so instead I’ve just bought adaptors. From China. Also, bonus, I get to keep the fuses for added safety.

And BC – Edison Screw lamp adaptors. I was unaware that such things existed – so I’d bought one of the 85-250v LED BC lamps for one of the anglepoises (as a test), but having discovered these I can just go to the store and get what, in the US, are regular LED bulbs and throw those in. Hurrah! These adaptors were way cheaper than the special bulbs and had free postage. Since I’m not in a raring hurry to get the lamps working, that’s fine.

I also started setting up my ‘home lab’, as it were. Up until now I’ve scrounged stuff from the lovely John, but 4k miles is a little far to take things for testing, and it’s a little tricky to ask John if he’d like to pop over for an evening of tinkering with electronics. I’ve finally got it together and bought a (new) soldering iron / rework gun combo. I wasn’t going to get a rework gun, I mean, me and surface mount are not close friends. But with our business plans, I may want to put together some kind of board with surface mount components, in which case a rework gun will become handy – and it was a few dollars extra to get that functionality. Second hand kit that’s also winging its way to me is a ‘scope that weighs approximately the same as the house (50Mhz Tektronix 453*).

I doubt mine will look 1/10th as nice when it arrives. Indeed, I know some of the plastic knobules from the switches are missing (the selector knobs are all there). I’m hoping (really hoping) that one day my 3D printer will arrive and I can print myself some new ones. If not, I’ve got some sugru in the toolbox.

I thought about getting something a bit fancier that would be better for digital hardware (perhaps the 150Mhz 454), but if I decide I need that later I can either sell off the Tektronix 453 and get something ‘more modern’, or just suck up the expense if I’ve got attached to the 453. I’ve also got an HP 6200B bench power supply on its way too. John has infested my mind with his HP / Tektronix lovin’, which meant that other, cheaper options got ditched on the way to this selection, but I think they should be handy. And the 453 seems to be considered to be a pretty good scope – which it’s within the realms of my knowledge to repair and keep going.

Whilst the scope is slightly frivolous at the moment, and is partly a ‘I have little to do at home’ thing some of the kit will be handy straight away. The bench supply will be handy getting the car alarm configured… since it wants to charge a bit before it works, and you need to send it various text messages to get it configured. That bench supply will also be doing duty building up the circuit for the first kit we’re planning for our business.

Most of this kit is pretty tatty, but should be enough to get me ‘up and running’. At least, once I’ve given it a really, really good clean it should be.

This splurge of spending does mean that I’m now rather over excited when I see UPS and USPS vans, which tediously never seem to actually stop here…

Still. I don’t think I can buy much else for the rest of the month (except for needs – like maintaining my poor Minor, that’s had hundreds of miles added some weeks). At any rate, I shall try to exercise restraint. I’ve put a bit into my savings this month and then I’m hoping to put some of the funds we extracted back into the house-savings too.

At any rate, the rain paused yesterday for long enough for me to go and throw silicone sealant around the minor with reckless abandon. 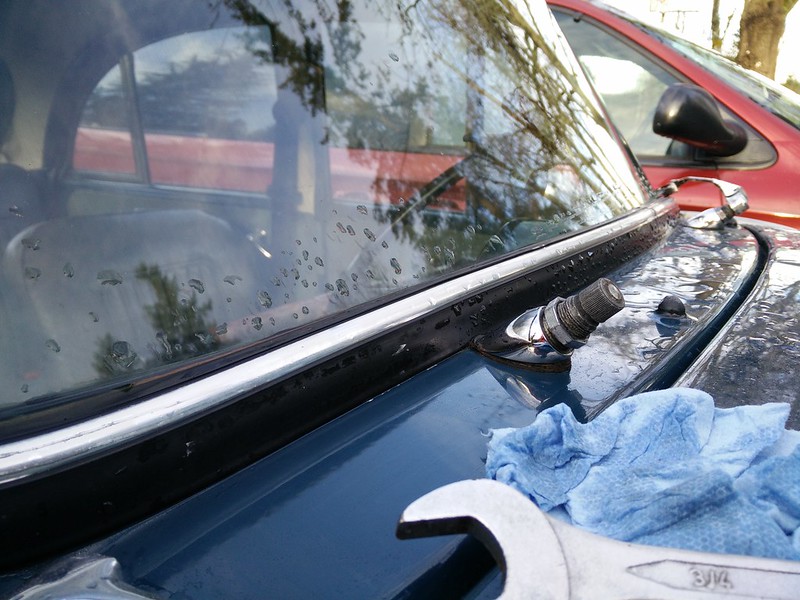 Water’s been dripping in through that wiper spindle’s hole for a while. In an attempt to prevent it totally destroying the glove box liner, and the radio underneath, and then the floor below that, I whipped off the nut cleaned up the seals and put them back with a thin layer of windscreen silicone on them. I note that this has been done before, with what appears to be gasket sealant. That might have been me… but it didn’t work that time. Here’s hoping this time it does work. Overnight it’s rained and there wasn’t any water that I could feel, so fingers crossed I might get some relief from that.

I also attacked the boot (trunk) – using sealant around the holes where the “MORRIS 1000” badge is mounted. This morning the boot (trunk) was actually bone dry, which I think is a first, and made me quite happy.

I also commenced trying to understand how to fit the alarm – and realised that actually, it’d probably make more sense for it to be on our family contract for it’s SMS messaging, rather than me stick it on the Net10 sim I’ve got kicking around. Well, maybe. We need to go and see if we can beg a cellspot for the house as it is slightly ridiculous that you have to go outside to make calls a lot of the time and while we’re there I’ll see if I can add it on at a low rate. Otherwise I’ll see which provider is cheapest for a pure voice/SMS option. It doesn’t need data of any sort, so it’s a big silly getting it a voice/data contract. I also realised that the alarm wants an SD card for some of its more handy features, and it makes sense to fit that before I put the alarm in the car.

Given that it’s a cheap Chinese system the manual is somewhat challenging to understand at times. Fortunately, it doesn’t seem to require too many features the Minor doesn’t have (indeed, it looks like it should actually be able to track the fuel level of the Minor, which is pretty nifty, though why I’d want to is unclear).

I thought about fitting it this morning; indeed that was my ‘plan’ for the day. But I am distrustful of the weather, and although it said “0% chance of rain” the forecast started to get a bit sketchy around lunchtime, and it looks like rain every day after now for a while, so getting part-way through is undesirable. I succumbed to my rain-fear and went for a walk instead. 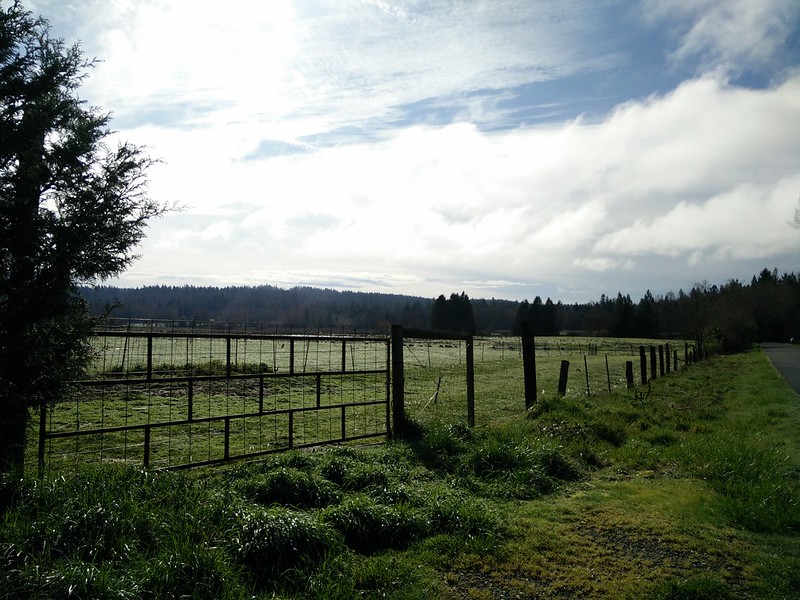 Which was probably a good plan as it’s been hacking with rain for the last hour and half, and I’d’ve probably still been out there dangling upside-down. I think when I have all the relevant bits, I’ll be a bit more enthused about getting it done.

In other news, I headed out yesterday to see if I could find a stick blender. We’ve wanted one for a long time, and before I got paid I kept seeing them at goodwill and value village. Of course, now I’ve actually been paid, they’ve vaporised. Goodwill does make me miss the cleanliness of most British charity shops. I’m sure there’s awesome stuff in there, but the electronics sections always make me feel rather like I need to wash my hands thoroughly on leaving. Anyhow, what I did find was ‘Goodwill Outlet’, which is a fearsome place. Unsorted, sad old things piled into plastic waist high bins… It’s the kind of place I feel the need to have a companion, because rifling through the stuff in there by yourself, it feels kinda weird. I suspect that there probably are stick blenders lying prone at the bottom of those bins, but I didn’t quite have the guts to pull so much stuff out.

And then we come to the elephant in the absent room. The house.

We’re off looking at properties this weekend. Five of ’em. One with a building, one with a ‘building’ (it’s a house of “poor quality” built in 1901), and 3 bits of land that are just land. I continue to feel the disappointment from the permit-disaster-wetland-hideousness, but hopefully one of these will speak to our souls. One of them, funnily enough, enormously close to where Kathryn’s mom used to live, and would give us effectively the same view. Which is weird. Although the land-with-buildings-on may be better for us, in terms of both location and usefulness. Still, we’ll see what happens.

* Handily, this is old enough that the entire manual is available here