Popping out, amongst other things

Comments Off on Popping out, amongst other things
General

So, I think because I ramble a lot at @pyoor@mastodon.lol at the moment I’ve been writing less on here, or maybe this is about my consistent level that I’ve been at for a while. It’s been a minute anyhow.

The house still, unsurprisingly isn’t signed off. I need to get on with that but with Xmas approaching it’s been something I kinda put on the back burner. But – what’s happened since then? Well, we took a very short holiday – 2 nights up on Bainbridge Island, which was very pleasant…

The idea was a reading holiday, but the place turned out to be kinda chilly if you didn’t have the wood stove going, and they only provided a little bit of wood… which meant that we would either have had to run out and buy wood, then bring it back, or alternatively we’d’ve had to just be chilly, so instead of spending the whole time reading we actually spent most of it dinking in galleries, the museum (which incidentally is fascinating), and antique shops. Oh, and the very lovely bookshop where I picked up Chelsea Manning’s memoir, which is on my ever growing reading list. I did, however, spend some time reading The Petroleum Papers, which is currently both making me fascinated, frustrated, and providing grist for my video writing brain. 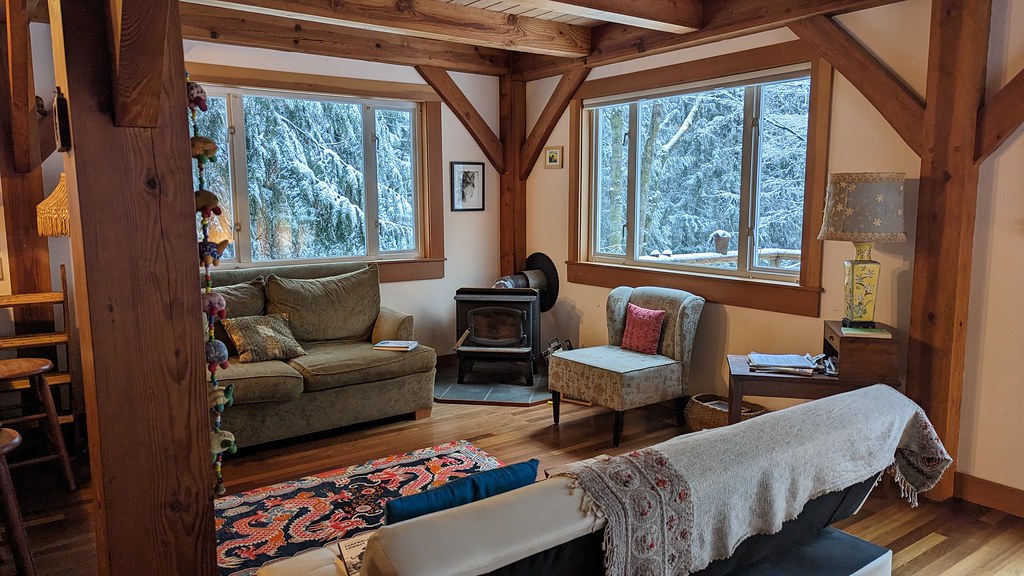 While we were there, and for the first time ever, Thelma (we think it was Thelma from the photo) decided to go walkabout in our neighbour’s garden. How she got there remains a mystery to us – and given Thelma – possibly to her also. We know this because while we were pottering around an antique store we got a phone call from another neighbour who asked if we’d received the first neighbour’s message… which prompted me to look at my phone (which I’d been studiously ignoring). And there was a message saying that our chicken appeared to be in his garden.

After a photo to prove identification we hurriedly arranged for Kathryn’s dad to make an extra trip over to initiate a rapid chicken extraction – which apparently involved him walking down the street, chicken in hand, with her sticking her head out to see where she was being taken. Thankfully, Thelma is a very tractable soul, on top of which it was dark by the time this happened, which meant that transportation did not involve the Benny-Hill chase and capture we have to do with some of our other chickens. 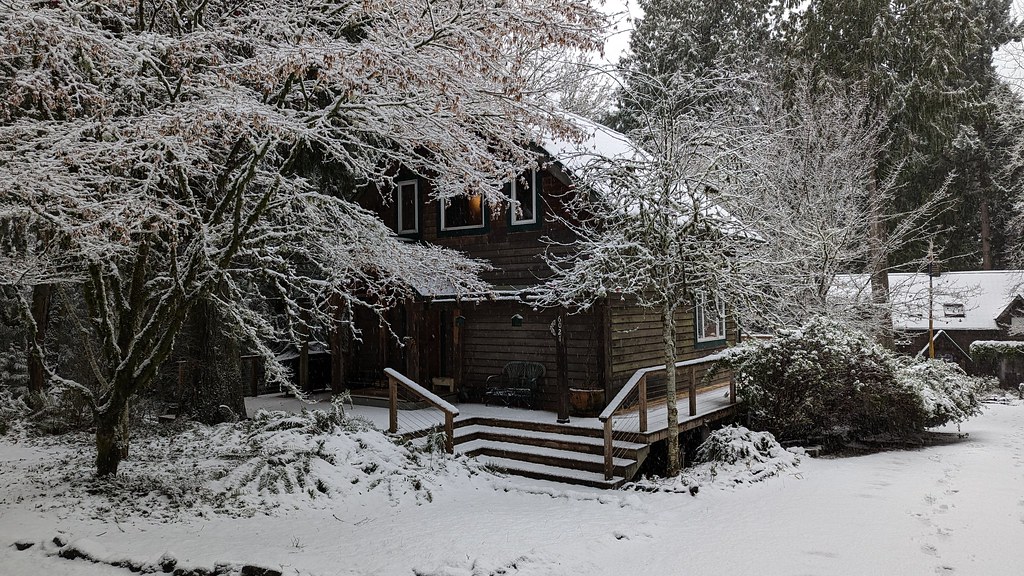 Our holiday was also cut short by a storm that deposited a bunch of snow on the PNW, meaning that escaping from our Airbnb (which had a fairly long, steep drive) involved us backing our car out, much to the chagrin of a neighbour nearer the road who was in the process of clearing his bit. That’s because going forward there just wasn’t enough weight on the front wheels to keep us moving, and we lost traction pretty rapidly. Raven and her oh-so-expensive Hakkapelitta tyres did their job though, and actually the rest of the journey while not exactly relaxing, was conducted without issues.

Just before we headed off, I also forked out a bit of money for a treat – well two, actually. One was accidental and foolish – I was considering a laptop that is less good at distracting me for when I’m writing my story (by which I mean the – I think 2014 NaNoWriMo story I started and have continued to write since, on and off, mainly off. I picked it up again a while ago and found that I still don’t hate it, much to my surprise, and keep writing little bits, but my “oooh, shiny” brain gets distracted rather easily). So I was sort of contemplating something like a Cambridge Z88, because I always wanted one of those as a kid, and they’re simple and functional and y’know, it’d do the job nicely. Unfortunately, the seller of the ones I was looking at wouldn’t ship to the US, and for some reason eBay wouldn’t let you ask that seller questions.

So then I was browsing around, as y’do, at least as I do. And I saw something I literally don’t think I’ve seen more than once on ebay before, or even for sale anywhere before. An Acorn A4 laptop. A working, A4 laptop. I was frankly stunned. I still remember standing before Helen Morgan, my computer teacher’s laptop in awe in about 1996. I’d wanted one of these since reading my copy of Archive with a review of it. It would have gone so nicely with my Archimedes A410/1.

But obviously they were uber expensive and there was no reason I needed a laptop, so… I just gazed in awe. I wasn’t allowed to touch it* but it stuck with me. Anyhow, that was up for sale and the owner was really forthcoming about it and so I was quite, uh, overexcited. And put in a bid. And won. And that was all very well, except that when he was checking it before sending it turned out that it had died and would no longer power on.

Incredibly, and reminding me of part of why I loved being an Acorn user, he e-mailed me, explained the problem and suggested a full refund. I in turn suggested that maybe he’d like to make me an offer for what he thought it was worth dead – and I agreed to that price which was frankly very good, and now its winging its way towards me. Along with a spare screen I bought because I knew the screen was faulty when I bid on it – but it only seemed to be a small issue…

I hope I can get it working again.

Which doesn’t really help with distracting me from writing.

Maybe I should still get a Cambridge Z88 ;)

Also in the archaic technology world, something else that has been somewhat fixed: 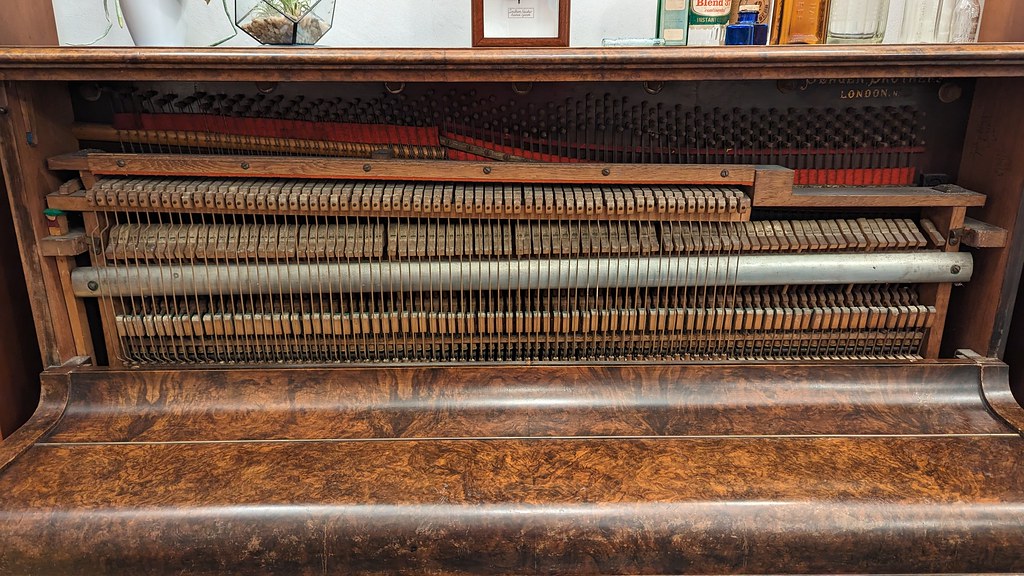 Yup! The piano is actually in tune! It’s astonishing. The guy who we got at a friend’s recommendation was lovely. He was suuuper hesitant to take on the job, because she’s not been tuned for coming up on 8 years, and at well over a century old complete with overdamper action and being a 435Hz middle C piano, there’s, well, much to be said by many folks for “it’s just ornamental” or “throw her away and get a new one”. But as I explained my sentimental attachment to this enormously heavy lump far outweighs its financial value. So I was delighted that he was willing to come and do it, and he, it turned out, rather liked the piano. Win-win.

Now I just need to find time to play, which means not spending quite so much of my life online…she says, writing a blog post. Although the demise of Nazi Bebo / $8Chan by Elon “can’t manage a turd” Musk has helped with that. While I enjoy scrolling through Mastodon, I don’t feel quite so…required to do it? I dunno, it tempts rather than feels necessary.

Also, and you may have noticed this, Christmas rolled past. Because we somehow missed our anniversary in a pile of stressful events, we decided to be a bit more laissez-faire in our spending limit this year, which meant that I could finally get Kathryn a sewing machine (albeit one that really, it turns out, needs a new case because it is quite, quite musty), AND a drafting chair to go with the desk that I got her years ago.

She in turn got me so many awesome things, including some jewellery making tools which I’ve wanted for a while. And a book which instantly prompted me to realise that I’ve been making my life needlessly difficult with one particular part of my process. Have I mentioned I added jewellery making to my list of hobbies? I think around the same time as I started toying with makeup (she got me an awesome makeup book, which incidentally, is not a phrase I imagined passing my lips until fairly recently), I started making earrings from… electronics stuff. An odd choice perhaps, but one that entertains me.

It’s a hobby I’d like to parlay into a sideline business at some point, but it’s also one of those things at which you have to practice. Anyhow, she gave me a book, which seems very helpful (and which made me rethink part of the way I make these) – and as a result meant that I twigged I should be dipping my chips in pickle beforehand (pickle is a cleaning substance). I’ve been working with archaic chips which are often a pain in the arse to get solder to flow on, even with flux, and then look shonky when you do…

…and if I pickle’em first they’ll probably solder better.

Anyhow, that, a book I really wanted, a book I didn’t know I wanted… a stunning print that combines music and electronics and – a jewellery box because with my stint of making jewellery (well, earrings) I’ve ended up with more than will fit in the box I currently have.

Xmas was, as usual, spent cooking up a storm. Our seasonal favourite Christingle Pie (although they now put leek in, instead of shallot which is what’s in the recipe book), Sweet and sour sprouts with chestnuts and persimmons (it calls for grapes, but there weren’t any in our co-op), Nadia’s roast potatoes, and of course 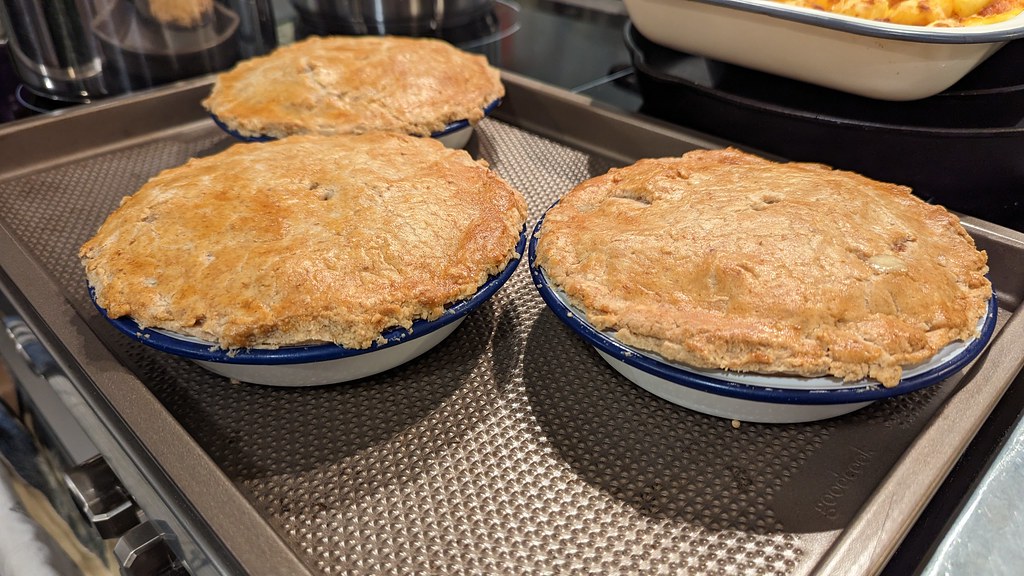 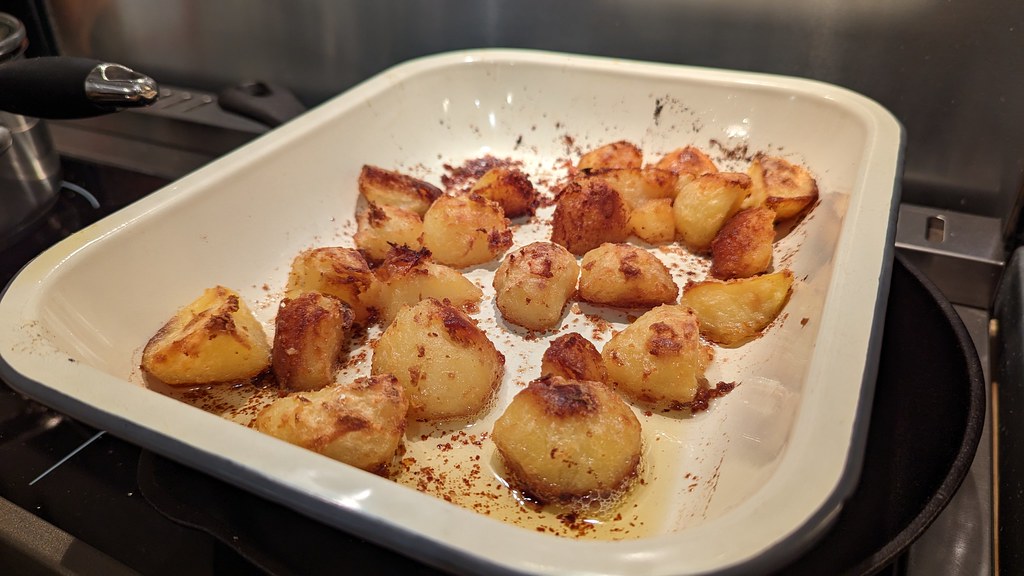 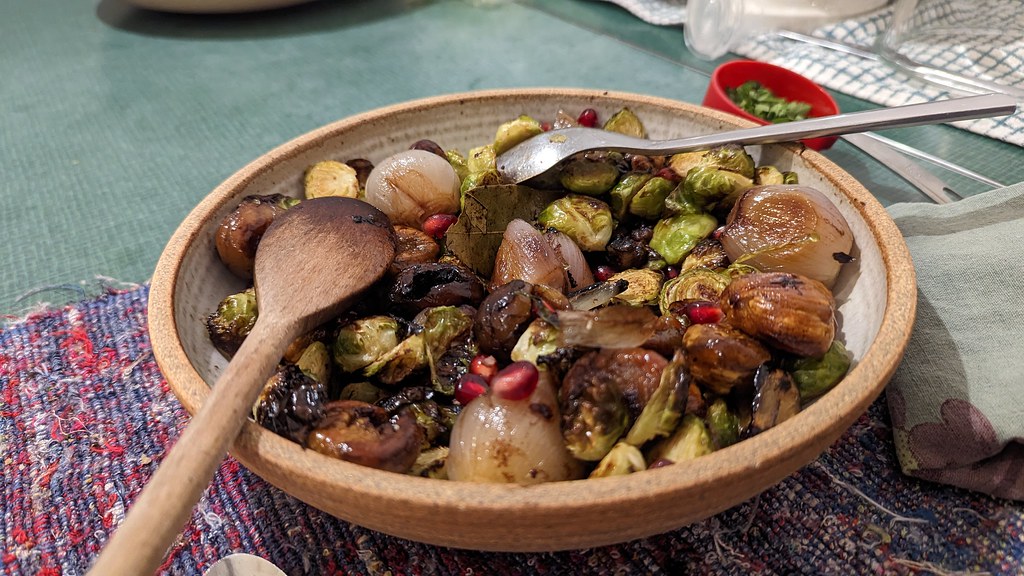 It was totally worth it for a really delicious meal, followed up – of course – by the christmas puddings. I’m not as happy with either my mincemeat (forgot the nuts) or my Xmas puddings (a bit too gingery) as I was last year. It’s the challenge of what I replaced things with last year that are just harder to get here (crystalized fruit, for example) – I didn’t write it down last year and this year just did some things differently. They’re still good. I still like them, but in a side by side taste test (easy because I still had a jar of last year’s mince pie mix) last year’s still wins by a country mile.

Anyhow, time rolls on so I shall disappear back into the eternal void, and pop up with more rambling later, I’m sure.

* Probably wise, she knew I’d accidentally allocated all the spare space on our BBC Micro based / Econet network to myself – because I’d hacked it but not realised that the allocations were, I think, in kB, not bytes.