I have finally made it to the north wall. I’ve not been exactly thrilled to work on the problem of moving the innumerable rocks that were piled on our driveway to make an ‘access area’ for our garage, and there have been more pressing things to do, so the slow progress of digging out around the house, and then filling that space with those rocks, has been somewhat delayed.

But today I set to on the back garden with a rotovator (rototiller). This may seem unrelated, but all will become clear. Since our garden has had very little care since it was turned into a garden 30 years ago (from, possibly, evergreen forest?), we decided that a rotovator was the better part of valour. And having checked reviews for electric ones I succumbed to a petrol one. The electric ones that are easily available seem to be somewhat lighter weight than the rental 5Hp one that I attacked our garden with today.

The plan – which we’ve enacted – it to make two fair size veg beds. We have 3.6cu m of compost to go into them, so today I spent the morning digging them over with the rotorvator. We’ll then throw the compost on top, dig it through the bed we’re going to use straight away, and just leave it covered on the bed that’s for a bit later in the season (or next season).

Anyhow, since bouncing around all over the garden with a poorly controlled petrol engine this morning I’m now knackered.

But the two beds – the main one and the somewhat more shaded one – are both dug. There’s a little bitty one that we’re going to make by the plum tree which needs to be dug by hand.

I have also moved the 3.6 cu m of soil into the back garden – filling the two veg planters, one of which is for tomatoes and the other of which is for… well, currently, beans. Some of the soil found it’s way onto the top of our front garden to try and leach some actual nutrients into the dreadful soil that we got from under the garage. Later in the year, as we’re wrapping up for winter, we may throw more compost and mulch onto it, but honestly, it’s always going to be terribly stoney.

That’s also the case for our second brassica and also chard planter which we filled with soil dug out for the garage foundations. The soil looked pretty stoney when it went in, but not half so bad as it did after the first rains washed the dirt off the stones. So we also threw about 4cm depth of extra soil in there.

But that still leaves the vast pile of rocks which, today, I finally got back to. I actually intend to go back to moving compost tomorrow, but for today I wanted to clear a bit of a path for the compost to come through, so I can wheel it to the two newly created beds a little more easily. So I cleared a section of rock behind one of our parking spaces – which meant that we finally – finally – have made it to the north, and final wall of the house.

I also spent some time pulling out the old drain soakaway pipe (ha) which had turned into a crushed plastic pipe filled with soil over the last 30 years. That’s what you get for not bothering to surround it with mesh. There’s still more to come out but I’m about 2/3rds of the way down the side of the house now. We also need to sort out the drainage from the front of the house which, if I recall correctly, currently drains into a small pile of rocks optimistically positioned about 10 feet from the house.

Oh, you can also see our deck in that picture which is…made of temporary things. Isn’t it… a nice duck-egg blue? All that will be replaced with deckboards and made much more sturdy. We’re also thinking of having planters along the north and south sides of it in which we’ll put some herby plants. Something like the planters we created in Bristol: 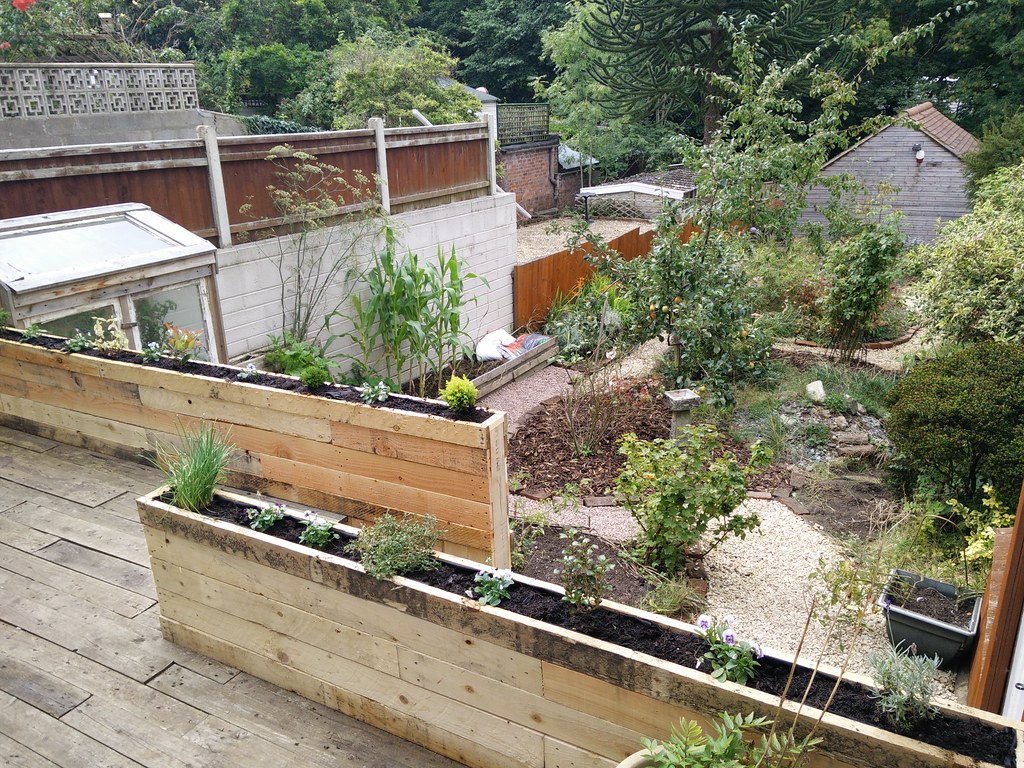 There’s still lots to do inside the house, obviously. And I do need to get back to that. But I’m trying to give myself some grace and work on the things that call to me right now. Funnily enough, the trim was actually calling to me this afternoon, but I was so freaking tired from dancing with the rotorvator* that I actually just felt not up to trying to do something that requires accuracy.

* In many respects it’s not that hard, it drags itself along and mainly it’s just application of weight that either stops or allows it to move along, its little peg – ‘drag stake’ apparently is the proper term – digging in to slow it down. This is all very well when you’re trundling through turned over soil, but when you’re trying to persuade the drag stake to dig into the well compacted sod of a lawn, well… it took quite a bit of forceful persuasion. And now my arms are tired.