Comments Off on On Productivity
General

Today I was moderately productive. I managed – after some prevarication – to cut three pieces of trim, although one of them (for reasons I’ll talk about in a bit) isn’t ideal. I also built the spare tyre stand – because we’re both fairly bored of hauling the tyres up into the garage attic, we’d like to use that space for storing tools, and it also means that when I get a bee in my bonnet about wanting to change the tyres over I don’t have to then wait for me to remember on a weekend when Kathryn’s available to help me get them down.

Also, getting them up there probably isn’t good for either of our backs.

Now there is a risk element, they’re outside and might become home to…small things. I also do have faint concerns about them going walkies without me. 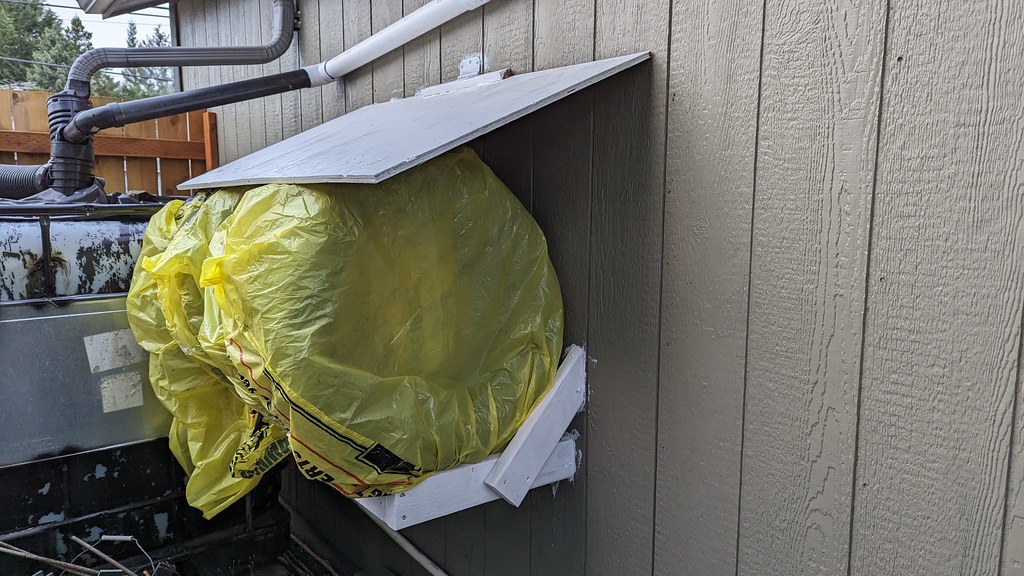 It also needs a proper coat of paint, and I realize somewhat belatedly that I should have put one of the 45 degree angle supports on the other way up – so one was supporting from the bottom. Pleasingly, however, it cost more or less nothing. The wood came from Bob’s 70% off pile, so I think it cost maybe $2 or $3? The screws are leftovers from another job, and a couple from my “stock”, and the paint is left-over from something…I don’t even know what. It’s cheap Bob 1-coat stuff.

I also read a script and did some e-mails for TE, did the washing up, three (COUNT THEM) loads of laundry (although, to be fair, one of them was a dust sheet, and the last load is just my work clothes because they got *covered* in woodshavings, and I accidentally got chicken poo on the work gloves).

Anyhow, the main job I’d set myself for the day was to cut the three boards that make up the left and right sides of the furnace cupboard doorframe (because why would we use pre-bought frames)… 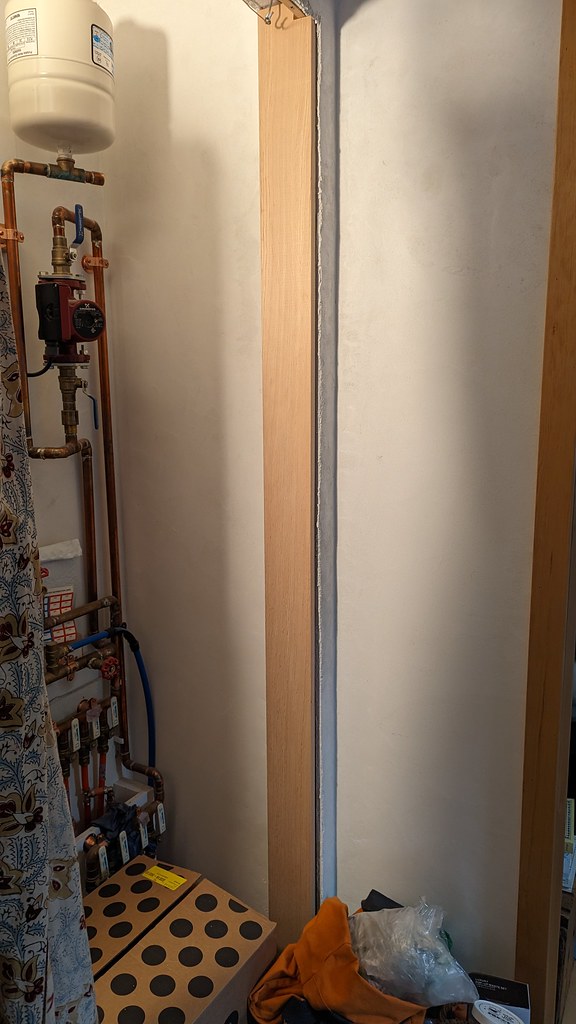 …and the board that the door closes against for the bathroom. Now I knew – I knew – that the bathroom board was going to be a pain in the arse. Probably a spectacular pain in the arse, because it overlaps the tiles in more than one direction, so I knew I’d have to take a *lot* off the back of it. I also knew that the method (hideous though it is) that I’ve used on the other boards probably wouldn’t work, because I needed to take such a thin strip off. I decided to router it out – which I’ve not had a lot of luck with before – probably because I’m impatient and want to take off too much at a time (foreshadowing, there).

…anyhow, so the way today went was that I cut the boards to size, then shaped the tops to fit around the various sliding / pocket door mechanisms. Then I had lunch and pondered whether I should – as I thought I probably should, make the tyre holder. Because the garage… 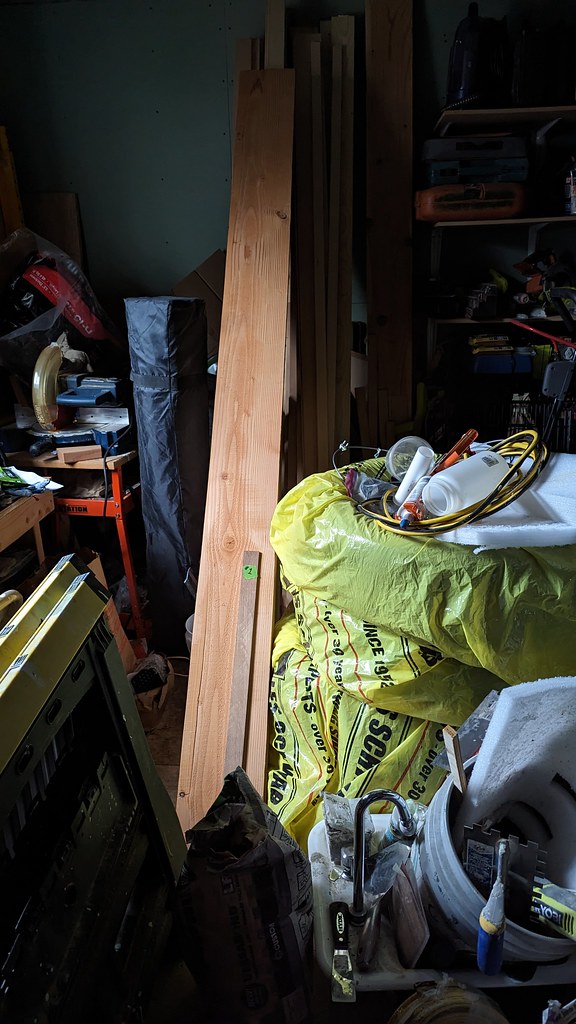 …yeah. It’s like that. And so I paused for (longer than intended) and did make the tyre support. Then I cleaned out the chicken coop. And then I went back to doing the trim. And that was probably a mistake, because by then I was quite chilly from having been outside in the cold, I was tired, and I really just wanted to get it finished.

And of course, I tried to rout out too much depth at once – although part of that is probably that I think the bit I’m using was completely nadgered – and managed to splinter off a chunk which will be visible. And somehow, in a way that’s not entirely clear to me, when I did switch to taking off thin layers at a time like a proper woodworking person I completely fucked up the depth adjustment – which means that I’ve taken off more than I intended. Although I vaguely feel like some of that was dealing with Problem A – that I’d accidentally hacked a big chunk out. Then, on my final pass, which was actually a reasonable depth, another splinter went walkies. So then I had to get the round-over bit and use that to try and fix the edge by taking off a mm or two, and then I had to sand it…because it wasn’t a perfect pass with the roundover bit. 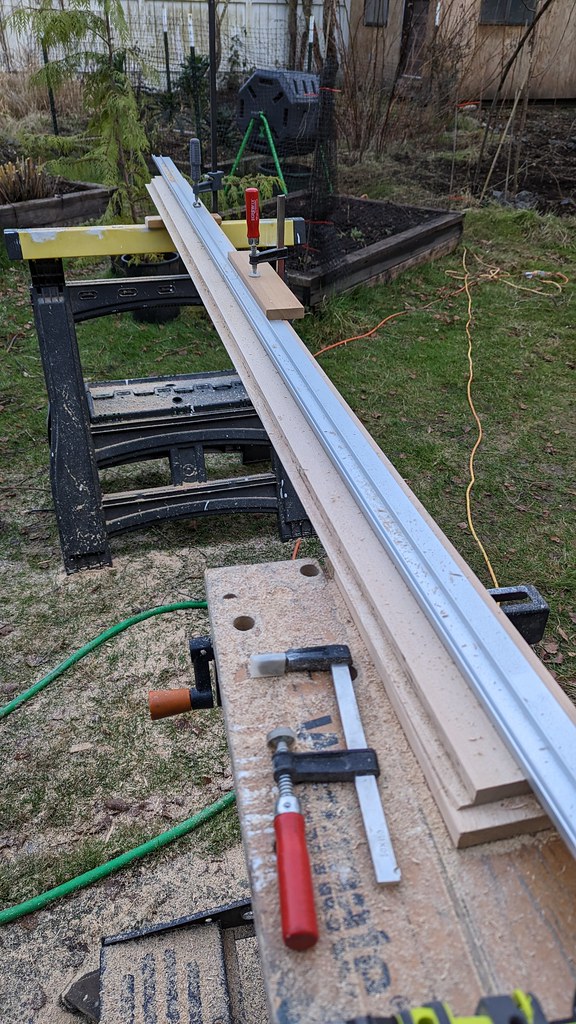 And then when I finally test-fit it I realised how far out the depth is. I’m now debating whether it will be okay with some grout to fill the gap (which honestly – I think might be a good idea anyway because the tiles are super inconsistent depth wise – actually not entirely a my-fault thing – because 6′ long tiles are quite bowed and to get the wall looking the best it good, the area with the most compromise was the very ends of the tiles on the basis that they’d be covered up by trim). I think it will actually look okay, and I think I’ve done enough to fix the issue with the edge of the wood. But meh. It didn’t feel good.

Anyhow, this all gets me to the elephant in this particular room which is me trying to work out how to deal with my drive to do stuff. To be productive. I mean, I don’t feel the need a lot of Americans I’ve met have to spend every waking hour at work trying to bring home as much money as is possible so we can… whatever it is they do with that. I have a very European work ethic – which is that I do my job, and I try and do it well – but when I’m done I try and be done. And we were both privileged, lucky and wise enough to not listen to the mortgage broker who really felt like we should borrow — and spend more on a house. I mean, don’t you want a bigger house? (I mean, marginally, but basically no).

But that doesn’t help with the drive to be productive not at work. I mean, I don’t always feel like it’s a bad thing, but I definitely find it’s hard not to do something towards the house, or towards some other project. And – yes – some of those are hobbies. Some of these are fun things that I want to do. And I definitely admit that I feel some pressure to get the house done so that if we get the Nazi party in (because that’s what they fucking are now. There’s no point in pretending otherwise. This is a group that are engaged in enacting genocide, scapegoat minorities, and are authoritarian and deeply, deeply racist. The only difference between them and Nazis is that the Nazis wore designer uniforms and the Republicans don’t) at the next election, which since they have the house at this election and will proceed to fuck-up-government, and our media will continue to bothsides things that ain’t got both sides, then a good chunk of the time I just see this spiraling down the pan (I mean, sometimes I feel more hopeful, but the endless deluge of anti-trans laws that would stop me getting healthcare or existing in the world (both actual bills that exist) is making it hard to feel suuuuper positive. If I wasn’t powered mostly by spite and contrarianness then I’d find life pretty fucking hard right now).

Anyhoo, so at that point exiting (stage left) pursued by a (Nazi) bear seems like a wise plan.

(Maybe Scotland will be indie by then).

So that definitely adds a certain pressure, as does “hey, we might adopt at any point and then we will be completely exhausted in a small-child-in-house kind of way”, and I remember my colleague at one workplace who’d started putting up shelves just before their kid was born and joked that he’d only finished after they moved out. That also plays on my mind. Also there’s now a GINORMOUS STACK OF WOOD in the garage, which makes doing things with my other hobbies in there kinda hard.

So yeah, I understand where some of that drive comes from. And I know occasionally I manage to poke it into submission and just chill and read and listen to music for a bit. Buuuuut, I’m aware that it’s probably not healthy and it’s something I should probably examine more. And maybe work on listening to it slightly less.

But sometimes it just seems like there’s just not enough time in the world to do all the things I want to get done (which is it, again. Shush).