Comments Off on A few minor successes
General

First up, our permit is signed off. While our house is no closer to completion than it was a week ago, when our house was signed off as legally complete by our permit inspector a huge weight lifted. We’re done with that part, and can move on to just finishing things that need finishing at our pace. Which had better speed up a bit.

That has meant that we’ve actually used our shower in anger. Well, actually, in pleasure. It’s rather nice. We’d held off using it after testing because, quite frankly, if it turns out there’s a problem we’d rather fix it in our own time than have our permit held up because we’re waiting to fix our shower. So we tested it – it worked – and we then waited… and waited… because other jobs to get us over that legally finished line took a lot of time.

And now? Now we can use it. And it works, and is really quite pleasant. Pleasing, even. The space is remarkably luxurious despite its small dimensions – in part thanks to the fancy floor/wall tiles in the shower area (the rest of the room is tiled in commodity porcelain large format tiles). 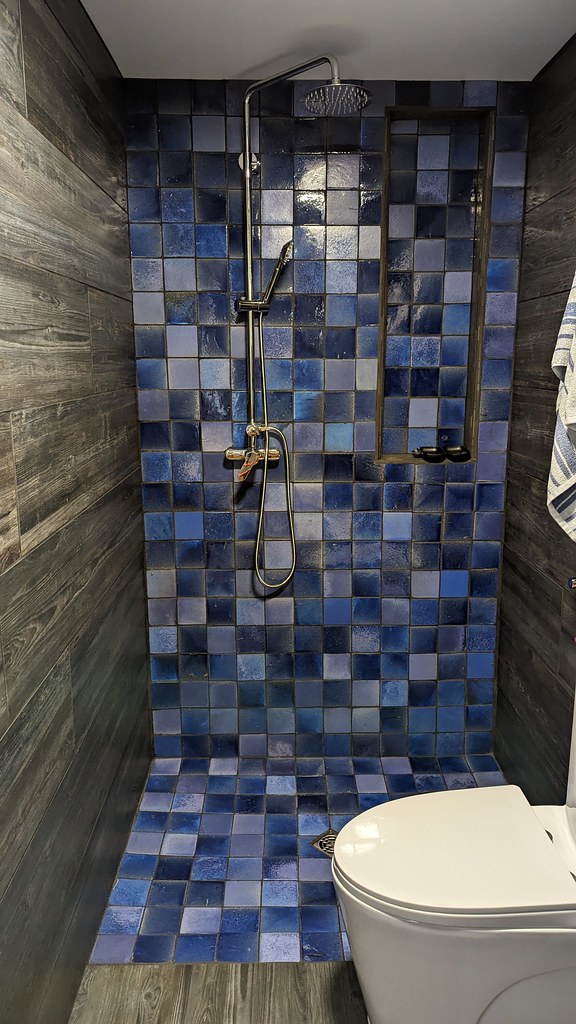 There is, however, the ever present trim around the door (and creation of the actual door step) to do: 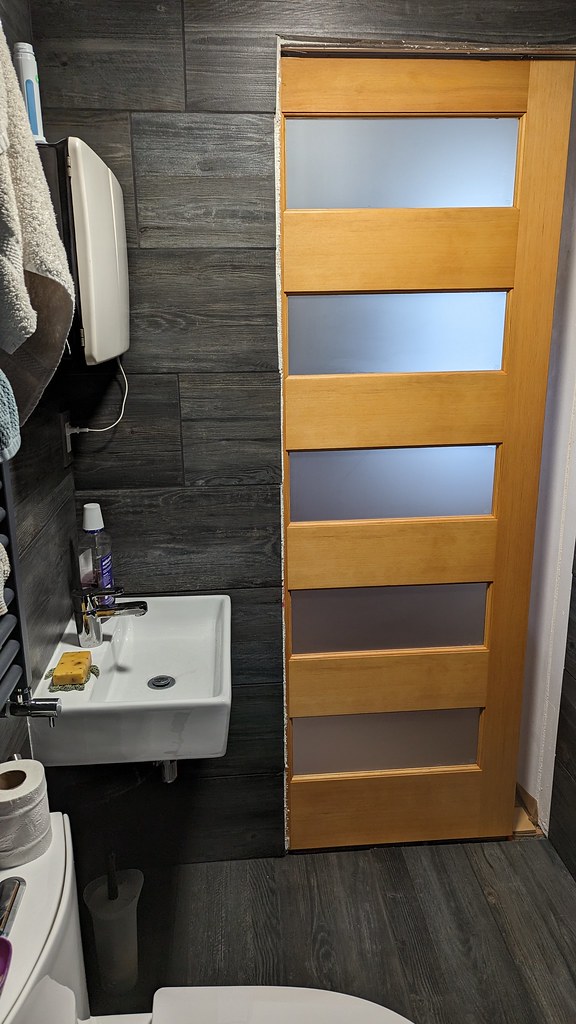 Buuuuut, last week I also got the wood for the vast majority of the trim that’s left to do. I’d ordered it the week before, but it arrived last week. There’s, iirc, about 25 pieces to cut, shape and oil which doesn’t sound like a lot – and isn’t, really, but the shaping is tricky and takes a fair bit of time and effort. But it feels doable, and having the wood right there makes it harder to ignore or put off. If we can have some days where the weather is good to me, then we might actually make a fair bit of progress.

We have also, at long last, come up with a more affordable plan for the missing doors. It’s a lot of work, for sure, but it’s also something that we can do with the tools we have and which is waay less expensive than our previous plan. Although I still want the fancy tool for other jobs.

The thought is that we’ll get a whole bunch of reclaimed fir (it’s made from wood pilings from Lake Washington) that they have at a Seattle store. The blue staining apparently comes from the clay in the lake. Anyhow, we’ll get some of these and biscuit joint the whole lot together into a door.

That’ll get hung from the simplest barn-door hardware we can find. We really, really wanted something much more minimalist, but neither of us have succeeded in finding what we want – and certainly not ain a reasonable price-range. Anyhow, that’s on the cards… just need to work out where we put sixty bits of wood while we make them into doors(!)

We also have to make the doors for the hallway cupboard and the furnace cupboard – so that’s 7 doors to make. Hopefully they’ll work ‘okay’ with the other – rather fancier – doors that we’ve got. But we don’t want to fork out the roughly $4k it would be to get a matched set for all the doors.

And in final good news, at least, I think final for today our record deck has (re)entered service. 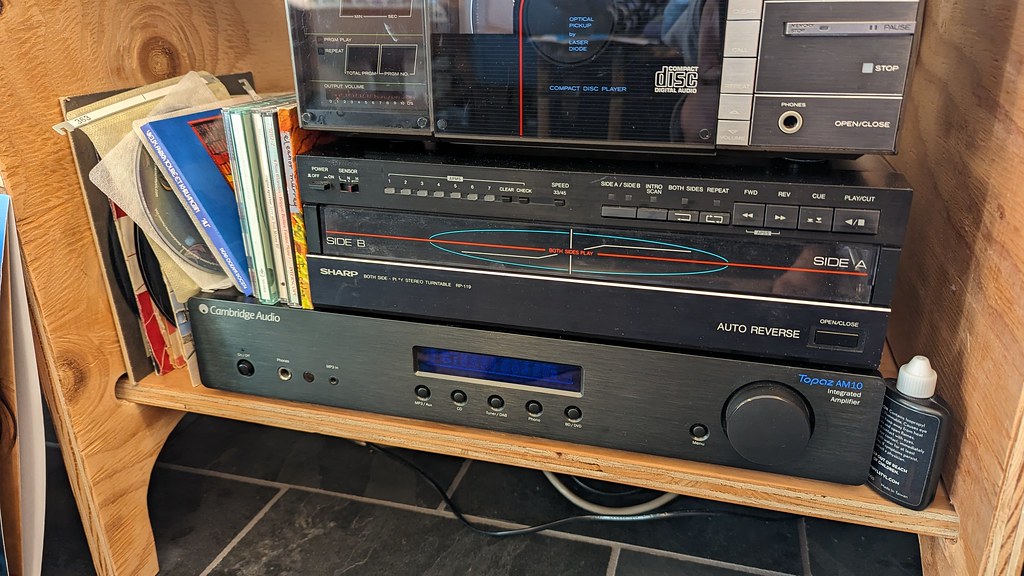 This ridiculous plays both sides, linear tracking record deck has been a complete mare to get working – even our local audio repair place won’t work on them at all because they’re too finicky to get working reliably. I won’t say that my repairs have quite hit perfection – it’s still occasionally got some speed variation which I don’t understand (unless there’s a bit of crud I somehow missed on the belt mating surface, but I was pretty thorough about cleaning that…I thought). It also is still fairly hopeless at identifying tracks on Side B, although Side A is fairly reliable. But since I usually listen to them as a straight-shot A-B it’s not a huge issue.

But it’s quite fun to have something where I can put on records while I do the washing up, and not need to dry up midway through to run and flip the record over. Also, it adds to my growing collection of hi-fi equipment that is ridiculously over complicated.

I’m still trying to lay my hands on a Slim Devices / Logitech Transporter – but if anything these seem to have got more expensive, despite being obsolete and barely supported. I’m starting to wonder if I should give in and just get a Cambridge Audio CXN… but I still really want the the twin VFD VU meters. I mean, I know it’s ridiculous nonsense, but I really want them.

But currently there’s some pillock selling a spares/repair incomplete one for $300! I mean…what now?