Comments Off on IT IS DONE!
General

September 2017 we laid our hands on the keys to a shoddily built 1970’s ranch. Western Washington back in the day had the most wildly lax building regs, and the builders of this house took full advantage. Our floor is built on piers with beams spaced 4′ apart. The floor itself is just car-decking (1.5″ x 8″ floorboards, effectively, laid on top of those beams). And the walls? Oh lordy the framing of the walls.

After 40 years of being rented it was… in very poor condition. I mean, we knew that. We knew the roof was just about done, we knew that internally it was pretty sad. And it smelled like cat urine. 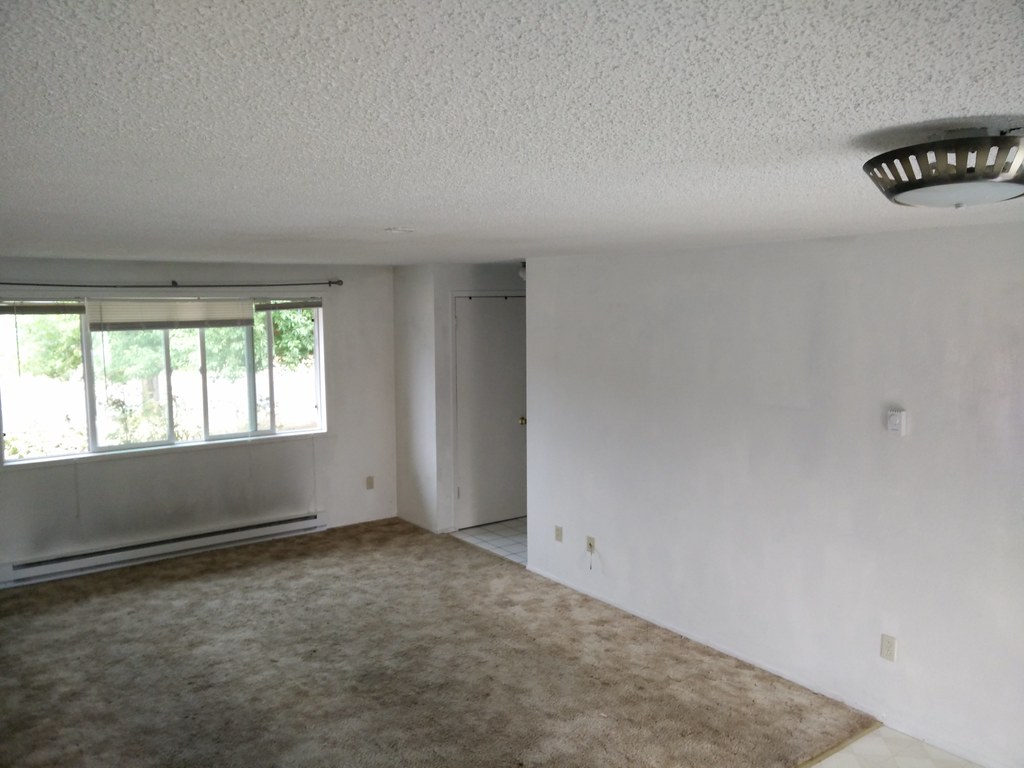 But we didn’t realise just how bad until we started ripping it apart. It was rotten as a pear with the middle of the floor being so rotten it was surprising the hot-water heater hadn’t just dropped through. The floor actually disintegrated in the hallway when I was ripping bits apart because of the bath drain, which it turned out had been ‘repaired’ by wrapping it in a plastic bag and spray-foaming around it. 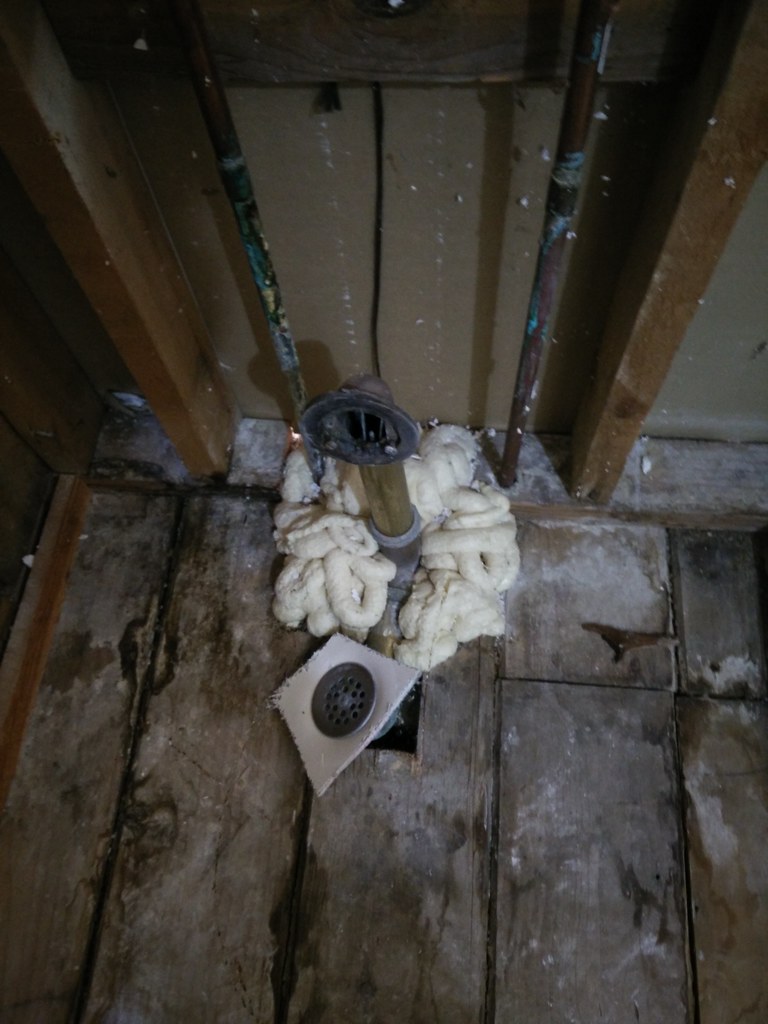 The kitchen sink can’t ever have drained properly, because the water had to run uphill to exit the pipe, and there were places where they’d managed to nail through the power cables. All in all it was astonishing that it had stayed standing for 40 years. We’d planned to dismantle it anyway, but it meant that we had to do a lot of patching of the structure that was there. And when I say we took it apart and fixed it, I mean we took it apart…and fixed it. 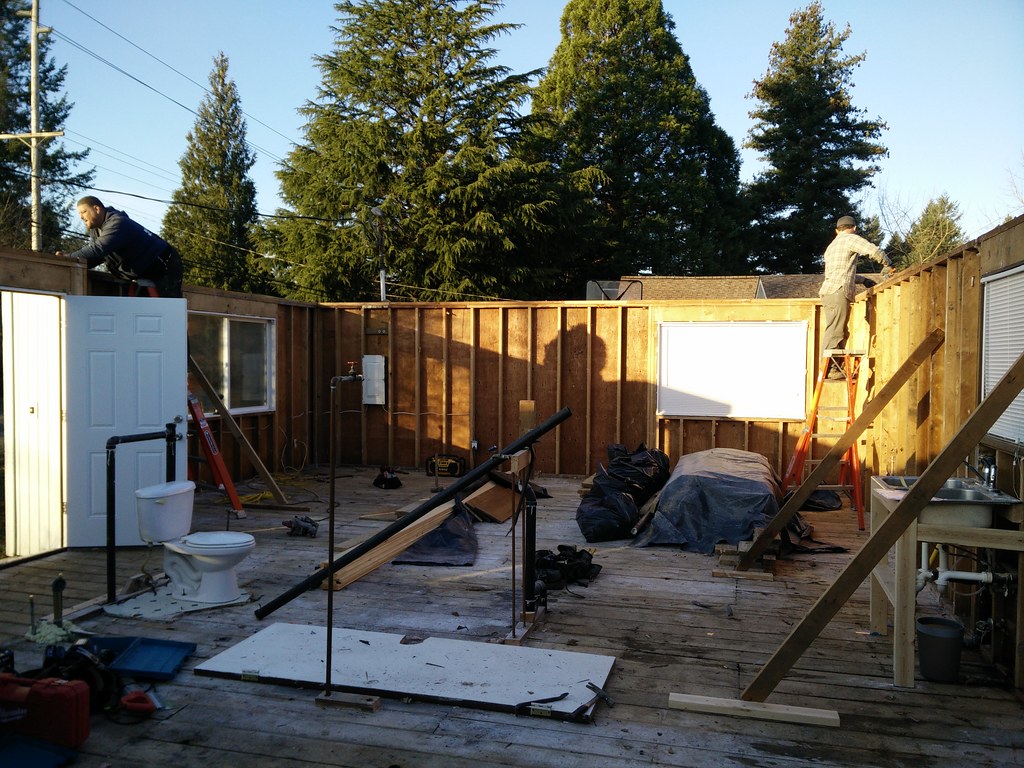 That door on the floor? It’s covering the enormous hole where the water heater had leaked into the floor enough to destroy both the boards and the support beam underneath. It was floating on soggy chipboard subfloor.

And today, after five and a half years of work (I estimated 9 months, I think*) our house permit was signed off.

It isn’t done. There’s still a bunch of – mainly – trim. There’s also the pantry to install. There’s the main bathroom floor to seal. There’s doors to both make and hang. But it’s a big milestone and it’s super exciting. So exciting I treated myself to a pain au chocolat and a coffee (albeit a black one) from OCR.

It’s been interesting looking through the photos because I forget.

I know it was a shit-ton of work. I know it was – and sometimes still is – an enormous slog. I mean, there’s a stack of 20+ pieces of trim to cut in the garage and I am not excited by that prospect. But just the sheer number of jobs we did. We’ve worked on every single piece of framing in this house. We’ve replaced a good fifth of the floor. We’ve replaced probably a third of the structural siding – and reframed those sections to remove or insert windows or doors, before covering the entire thing in wrap and a rain-screen.

We put up / laid every single tile, every single piece of drywall, every piece of trim, and helped put the lime plaster on the walls. If there’s a power outlet – with the exception of the two directly under the panel – we ran the wire to it, stripped the end off the wire, and then wired the outlet. We put the decor plates on every outlet. We installed every damn window, door…

….it’s wild. It doesn’t always make sense to me that we did all that. It doesn’t feel feasible.

Not least for a house we don’t intend to stay in forever. We love this house, it feels so much a part of us, and it’s incredibly individual. It’s fascinating because neither of us is into super-modern houses for the most part, but this place came out in a style that’s definitely more modernist. I’ve been known to refer to it as “Japandi”, because we borrowed elements from what we’ve liked from Scandi and Japanese styles. It’s also got, to be fair, a generalized European feeling. It’s taught us so many skills, and it’s let me learn so much about myself and how resilient I can be.

It’s also got me to try out so many skills, and in ridiculous ways. Did you know the bases for our lights in the lounge are laser cut? Not only that but they are carefully designed so that the bases adjust for the fact that the lamp mounts are equidistant from the floor – but we didn’t realise the floor was horribly not level when we put up them up. And because there’s a picture rail – that is level – above them, we had to adjust for a compromise that makes them look right.

Despite the fact that I don’t love the area – I mean, it’s fine, it’s pleasant and our neighbours are nice – but we live on a fairly busy road (although the clever design of our house means that most of the time I can forget that), but we really want to have more space between us and our neighbours. I mean, if I’m honest, we want to live far out in the sticks – which is definitely not an environmentally friendly option. Really, we want lots of efficient high-density housing. But that doesn’t tie in with us gardening, having our own chickens and possibly sheep and / or goats and/or bees and maybe a horse… P’raps a pig? I dunno. I/we’d also really like to renovate something that feels more like it’s architecturally worth saving (I’m so glad that we did this house, because it did teach us so much, and I’m grateful to it because it’s warm, safe, and cozy, and I delight in the weird angles we created) – either that or do something starting from scratch**.

And we’re aware that this next one? This will probably be the last one, so it better be one we want to stay in long term. Which means being somewhere we feel safe settling. Because really, while the GOP/Nazi party are definitely gunning for queer folks in general, trans folks (worse, brown trans folks) like me are their current main target. And I can say pretty unequivocally that I’m not yet convinced that the US is going to be a remotely safe place to be in 2 years time. That makes me sad, because there’s much to like (although the healthcare ‘system’ here is downright evil)… so who knows where we’ll end up.

Anyhow, enough for one day. If you want to see what we got up to from start to (not exactly) finish(ed) there’s an album with a massive number of photos here.

* I think Kathryn said 18 months… turns out we both failed to realise that working takes time, not living on site for a chunk of the time made it much harder to just “do a bit”, and we massively underestimated how much quicker it goes if you have, say, 4 or 6 people, vs 2 people who can just barely shift the sheets of drywall.

** Which doesn’t mean we don’t love this house. I mean, if I could scoop it up and put it somewhere else I’d be really tempted, although with a kid something marginally bigger would be nice. Not a lot bigger, but a little bigger. But things like the angles in the open-joint cedar that I literally spent months running individual pieces through the planer, hand cutting to length and individually nailing to the outside of the house***.

*** Never-a-fucking-gain. Gorgeous though it is.