Oh so nearly. Oh so close.

Comments Off on Oh so nearly. Oh so close.
General

So today was the big day. Well, kinda. Today was permit sign off day. Knowing that very few of you have your Joo Janta 200 Super-Chromatic Peril Sensitive Sunglasses on, and it’s likely that you’ve got enough stress and anxiety in your life, I’ll save you worrying. No, we didn’t pass, but it was close.

Our two issues (we built a whole damn house more or less, and there were just two issues) were that the fan in the main bathroom has died. It has to be working at the time of inspection. And that the hot water was too hot. It’s set right at the boiler, but it gets… over zealous. So despite being meant to be 50ish deg C (120F), it actually comes out at 60C (147F per the boiler). That’d be fine in the UK where it’s the recommended temp (60-65C), but in the US it’s apparently too hot.

That means I need to adjust the thermostat on the shower to prevent potential scalding – so I’ll have to look how to do that. Anyhow, we’ve ordered the new extractor fan to replace the irritatingly poor quality Panasonic one that died. Because of the way the ducting is done we’ve ordered the same damn crappy fan, because I really don’t want to have to re-route it all. It also means cutting through the floor because I really wasn’t expecting to change it (I think I’ve ranted about this before, so I’ll stop).

On the plus side, the electrical is all signed off. The inspector mentioned that since the house is still standing and we’ve been living in it for years, he’d kinda assumed it was done okay! But it’s really a relief to get that one off our plates.

While I was hanging out I finally got around to fixing the mixer. It’s been waiting for… godot? No, for me to be in the right mood – and also to suck up the postage costs from Finland, where the spares place is. I finally did that a week or two back, and the box arrived containing the one thing I needed – a new belt drive for it. 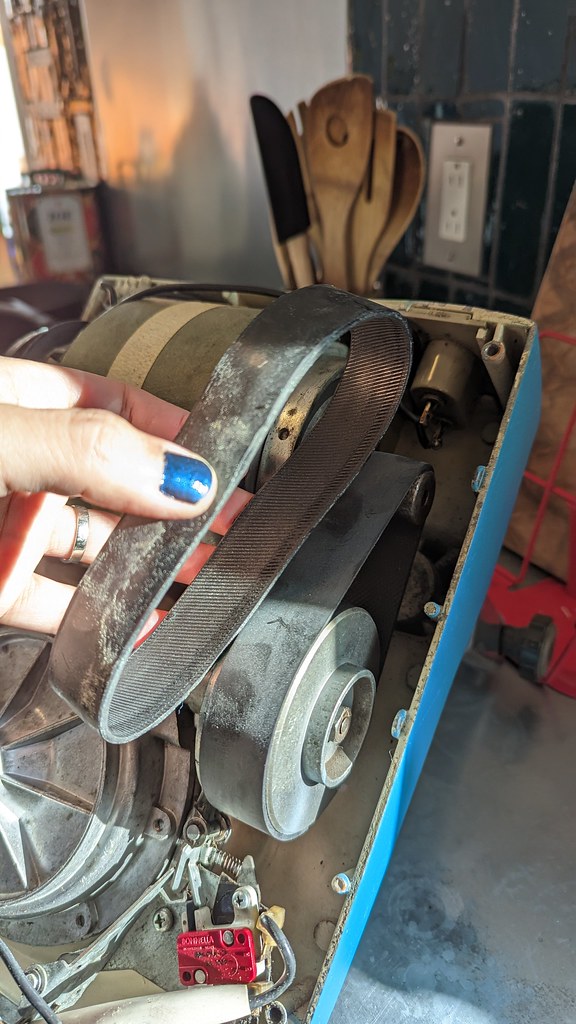 The actual belt install didn’t take long and it’s really clear that the old belt was completely shagged. If I’d’ve known how easy it was I wouldn’t have put it off this long. We also ordered the egg whisking bowl thingie that you can still buy brand new for it(!), and I finally got around to replacing the frontplate with a new lasercut front-plate which is now screwed to the internal faceplate on which are mounted all the controls.

I’ve been wanting to change it for a while because the glue I used to attach the other one reacted with the paint that I’d used to paint the front-plate. I also wanted to do it because I’m not wholly convinced by the epoxy on the internal frontplate. That particular plastic seems kinda hard to persuade things to bond to. So now, the screws act to hold that plastic in place too, as well as making it look pretty :) 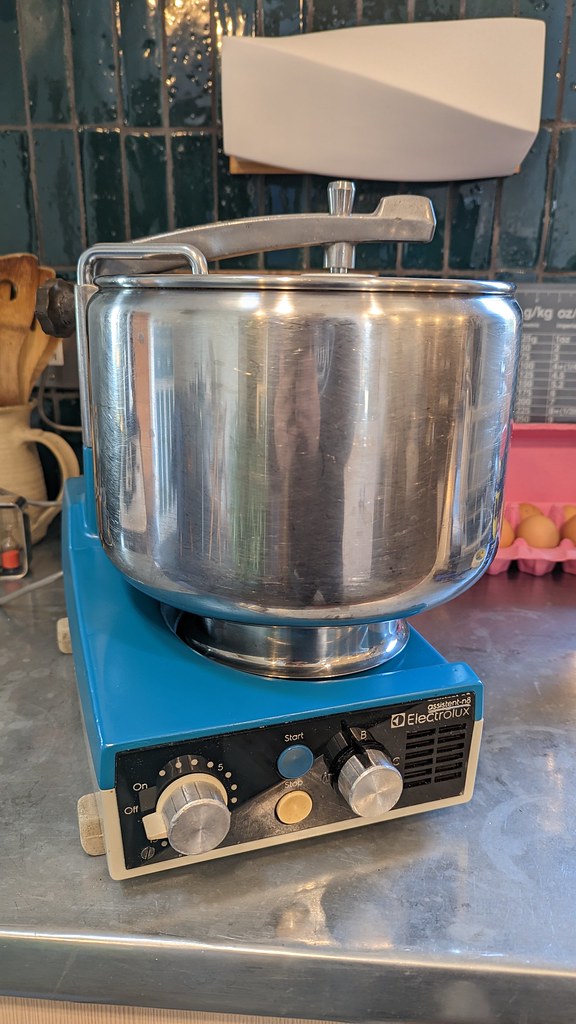 The rest of the day kinda filled up with errands. I bought some trousers from ebay which despite saying they were a 12, were huge. Vast. Oceanic. Since they’re nice ones I decided to try out a local tailor and he’s going to narrow the legs, make it fit better at the hips and the waist, and hem them. We’ll see how that goes – if it goes okay, then yay. If not, then I’ve learned something.

The question of why I’m buying clothes off ebay might spring unbidden to your mind, and if it does, it’s because… well, I don’t really know. When I started filming for TE I stuck with jeans and teeshirt, which is more or less what I’ve worn since I came out. Actually, that’s a lie.

When I first came out I wore more skirts, I wore more fitted stuff, and I was working my way towards something that was not just an extension of teen-me’s lack of interest in (or indeed very active hatred of) my body and basically covering it with whatever was to hand. And I toyed with wearing something…not jeans, not teeshirt. And then one of my exes put an end to that, more or less.

And I’d kinda settled into it, not least because I’ve never been thrilled by my waist, which since I was a teen – when I went through a phase of eating a terrifying amount of baked goods – I’ve had rather a lot of weight carried there. Which is not ideal for someone who’s probably fairly high risk for diabetes anyway. And then after last year’s comment from my doctor about just noting that I’d put on weight (he wasn’t unpleasant about it, just noted it, asked if I’d changed my diet, advised me to keep an eye on it), I finally found myself starting to actually work on this thing that’s bugged me for the last [many] years. Add to that that it quickly became apparent that whatever I wore, or did, I’d get transphobic bollocks in the comment section on TE. So… y’know, I might as well do what I wanted.

And now I’ve started to slowly lose that weight, and I’m starting to actually see impacts from exercising (I need to do more of that, but I am still running and doing core every day), and I’m starting to actually quite like what I see in the mirror sometimes. That, and I’ve been toying with makeup – I’ve been futzing with it since May, and I’m now adequate at applying it. And – I like what I see when I do that. Not that I feel like I need it all the time, but I like it for presenting on TE. And for various reasons I may need to actually appear professionally in person in the future (I do have to twice this month), and I feel like it meets an expectation (yay, patriarchy!, but also…I just kinda like it). 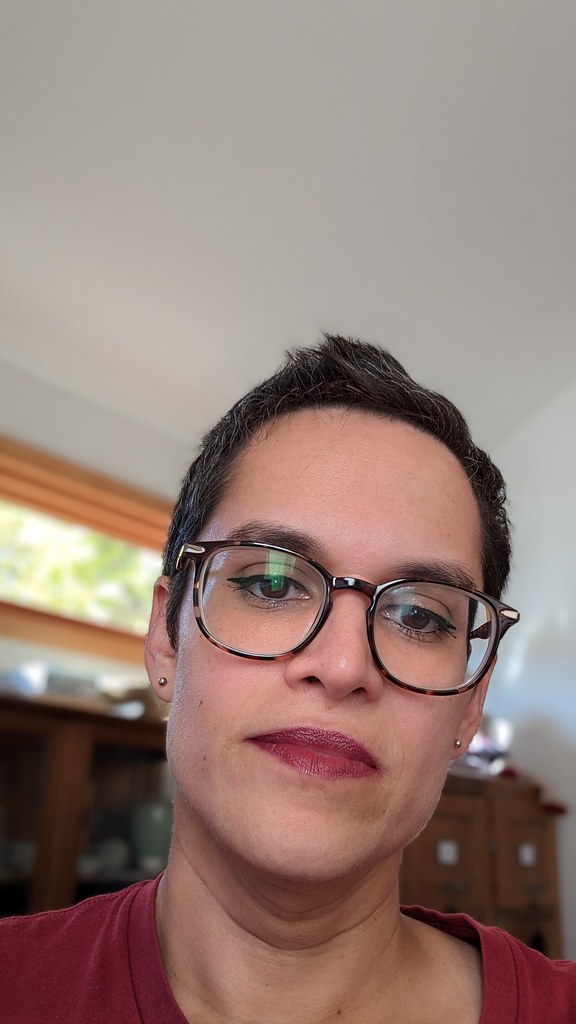 And *that* is at least in part why I’ve been buying odds and sods off ebay. I don’t want to buy new clothes – I don’t need to support that industry. But there’s a lot of good used clothes – the only problem is that clothing sizes (particularly women’s clothing sizes) are, as we all well know, a hilarious practical joke. And so one size 12 item is wildly different to another. And so while one thing I might need a 12, the next might be a 14, or a 10… Meh. Hence the tailor / trousers situation.

I do need to go through my clothes and rationalise a bit though. Because its kinda getting out of hand.