When we cleared out the storage unit there were some things that really needed somewhere else to be. I mean, I suppose it all needed somewhere else to be. But there were some things which we didn’t have space in the house. Some of those things – like the two bed frames we were hoping to sell (but failed to sell) that are now sat in the garage – they we had a plan for.

Granted the plan failed, but… we had a plan.

The other big thing that won’t fit in the house (or it would, but it would be somewhat of an imposition on whatever space we chose to put it in) was Kathryn’s desk. This is a large, oak architect’s drawing table that I picked up back in the UK as a gift for her.

It lived – back in England – in Kathryn’s studio: 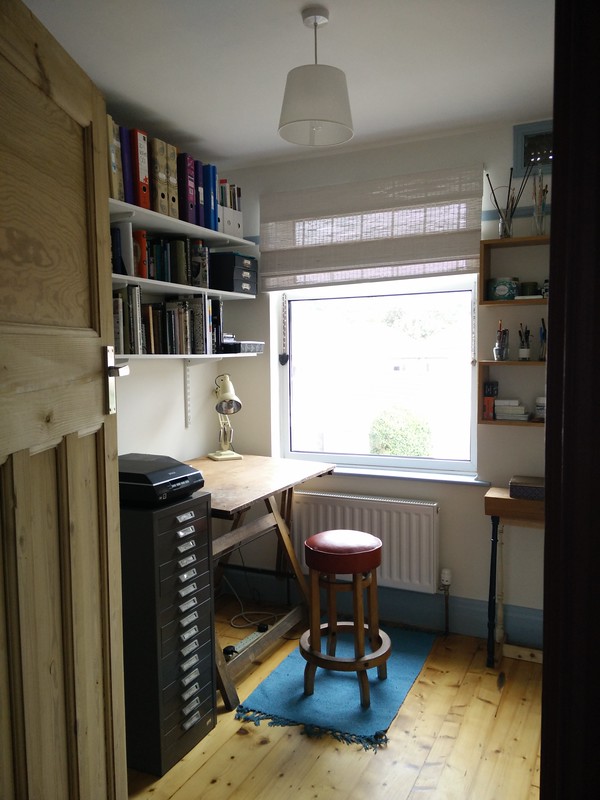 But over here it’s basically sat in storage. We had it out for a while when we were staying in George and Tom’s – when they were away – but otherwise it’s been kept out of the way. And this house just doesn’t have space for it. But Kathryn loves it and I am rather attached to it as a gift that I got for her… so the plan, such as it was, was that we’d put it in Kathryn’s studio here. Which is a building that, at the time we brought the desk to the house, existed purely in our imaginations.

It wasn’t even down on paper, I don’t think. Maybe there was a sketch of the general concept? Anyhow, it certainly wasn’t planned out beyond “it goes there, on the foundation that we had poured when we had the garage foundation poured”. And it’s about yay big.

But as the weather’s got colder and wetter, there’s been increasing concern about the vintage oak desk sitting in a cold, unheated garage. And so this past week we set about building the studio. The weather last weekend was predicted to be fine, and so on Thursday last week we scheduled a delivery of a large pile of wood.

It didn’t come ’til Friday (thank COVID for that) – but it all worked out more or less okay (although Kathryn had to cover the lumber up by herself because I was at work). Come Saturday we started work, cleaning off the someone chicken-decorated slab, and made a frame to raise the studio up off the concrete. It took a while – and was interrupted by me going to do a motorcycle skills test for my WA licence, which I’d booked without realising what a pain in the bottom it would be. We were also somewhat interuppted by me having to go to home depot to get some bits that we didn’t have (foundation bolts to stop it escaping in a quake, timberloks to hold the frame together and so on).

Anyhow, by the end of the weekend we had some confused chickens and two-ish walls (the east wall, visible in this picture was missing a triangular segment that meets the shed roof).

We might have got further – we would have got further – but we went to our local habitat looking for windows, and were sadly disappointed. Their range of windows has never been fabulous but there just wasn’t anything there that would really work. Eventually, having stared at them for a while, we accepted that it wasn’t happening, and went back home. We found what we wanted (up in Tacoma) – but that took a while and then I had to run up to Tacoma on Monday morning to get them. Which also took a while because it turned out the one of the tyres on the trailer had perished…. It was one of *those* processes.

But Kathryn took some time off work on that same Monday so that we could do the next two walls – and on Tuesday – in a fearsome sprint – we got some of the roof joists up. That meant that we could throw a tarp over the building – which was handy because the next few days were very wet. Unfortunately, the only tarp we have that’s large enough is… shall we say “leaky”, and though it’s definitely far less wet in there than it would have been had we not thrown a tarp over it, it’s wetter than we’d have liked it to get.

Especially since the floor is shop-grade ply – one chunk of which seems to have deeply resented the damp and decided to delaminate somewhat (poot). The roof is too, but the walls are actual factual building code standard. Granted that’s only because they didn’t have any shop-grade. ;)

Which meant revising “how to install a window”, and also cleaning the window up a bit that’s sat in the garden for several years, and yes, it’s a shed. I mean, it’s Kathryn’s studio, but for structure purposes it’s a shed. Just a very nice shed. I mean, it’s a shed that’s being built with decent framing, being insulated, and then also being wrapped in Tyvek. And once you’ve done the first bit of the ridiculousness then you might as well go the whole hog and properly flash the windows. So we did.

But that takes time.

So now this week we’re hopefully going to get the roof deck up and finished, the tar paper down and then maybe even get the metal roofing up. Once that’s done, the door and other window are in, and the fascia boards are up (and ideally the bird blocks, too)…oh and the last bits of siding… then we’ll be able to take a breath because it’ll be weathertight.

But that’s still a little ways away.

But it’s coming along and I’m really quite proud of how much we’ve achieved.