Life continues. At least for us. COVID continues to kill at a pace that is distressing, but the news media seems to be done with talking about it. Probably because there’s only so many ways you can say “because Donald Trump thinks you’re all worthless and mismanaged this whole thing, now hundreds of thousands have died and many are still dying and it’s going to be very difficult to clear it up”. Also, it’s much less interesting when the administration is actually trying to tackle things. Apparently, today Biden’s dog injured someone at the Whitehouse. So, err, that was big news.

I have been noodling at projects, and noodling at the house. I can’t say I’ve been very rapid about anything very much (in a pandemic), but I have been making progress.

The garage is now heatable – sorta. If you throw a radiator and leave it, by the afternoon it’s adequately warm. This allowed me to oil some freshly obtained trim, and also to oil the ends of the trim that we already had that was cut to size. For the first time in weeks (months?) I put some trim up a few days ago, and a second lot today. Not loads. But it’s progress (in a pandemic).

I spent some time today measuring up for the pieces that I’ve oiled – so a bunch of them can be cut down and I’ll get them installed.

I’ve also put the mixer back together! (Whaaaaat?!)

I know, the last I posted it was in a lot of bits.

So – a quick recap of the repair:

I am so pleased with how it looked (foreshadowing there).

I also replaced the two very sickly capacitors with ones that are hopefully less inclined to go bang. At least, not for maybe another thirty years:

These Rifa polystyrene capacitors are notorious for their ‘splody tendencies as they get older; so if you’ve got anything of the 20-30 year ilk with them in I’d recommend digging in and changing them. They’re pretty cheap and changing them is usually not too much hassle. Less hassle than waiting for them to let the magic smoke out, anyway.

That done, I sanded the outside of the machine. Now I wasn’t trying to get an as-new look. Otherwise I’d’ve stripped the whole thing right down, stripped the paint off, and started from scratch. Which might have been a wiser choice, but I’m not really that bothered about it looking perfect. I really want it to work and look fairly tidy, so I declared that a clean, a light sand, and a new coat of paint would do. I took it into my high-tech filtered-air spray-booth, and gave it some high-build primer and a coat of…errr, some blue paint that we had left over from doing the lights because we felt it was too bright a colour for the lights. 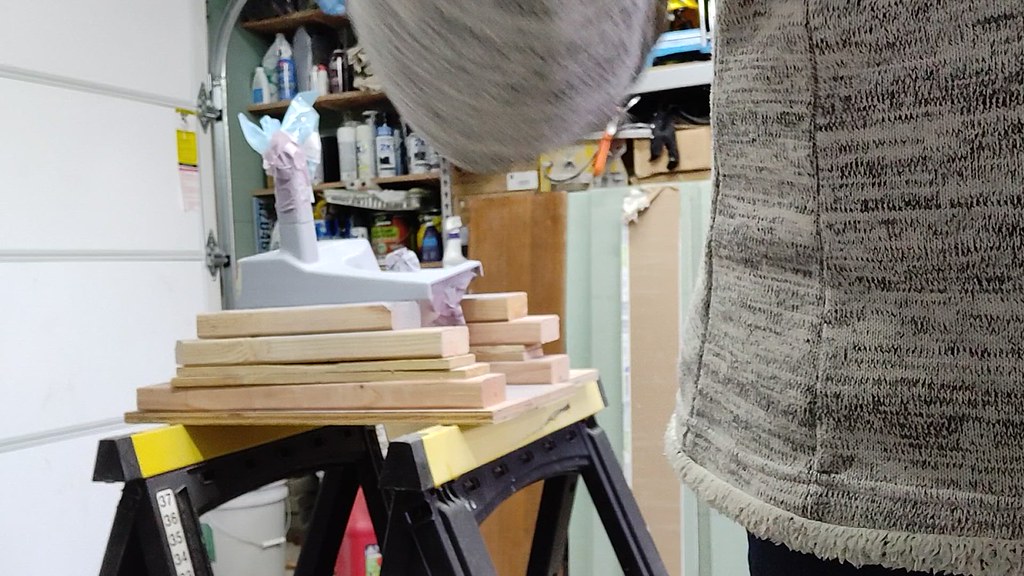 Having left it a few days to dry I did a test assembly – and checked it was working, then I put it back together. Now my original (and better) plan was to screw the new lasercut panel to the original backplate/knob mounting plate (the original piece of metal was thinner and glued to it) – but I was concerned about alignment, so rather than do that I opted (foolishly it turns out) to glue the lasercut frontplate to the knob mounting plate. Now, if it breaks again then what I’ll do instead is just lasercut a larger mounting plate, etch the edges of it to make it thin enough to fit the slot, and it *should* fit straight into the case in place of the original knob mounting plate – and I can make it look pretty. It will have to have some screw holes for mounting, but that’s fine. I can break out some nice stainless steel jobbies for that.

Aaaanyway, back to the tale. So, I have a few adhesives around – car body plastic component adhesive (which is a contact adhesive); jb-weld and hotmelt glue are the main plastic friendly ones though.

I was a bit worried that both the JB Weld and the Car body plastic component adhesive might react with the paint. So I broke out the hotmelt glue gun. Which…didn’t work. Because it’s quite a big piece of plastic, by the time I’d applied a bead of glue around the whole thing, the start of it had dried.

After a couple of goes I gave up on that and gave in, trying the car body adhesive. This tempted me because it’s clear…

Unfortunately, it did indeed react with the paint which… went rather crinkledy.

But it still looks a damn sight better than it did on arrival:

Unfortunately, it seems some other things are excited by the prospect of spending some time in pieces in the garage. My much loved Technics SL-6 record deck has decided that either only playing a minute or two of any record is enough. That appeared to be a transient fault, because it then after a few days rest seemed to be working fine…

…until it decided to drag the stylus across a chunk of my copy of Sgt Pepper having played most of the way through. So that… needs to go out to be investigated.

And despite my optimism of ‘just ignoring it and hoping it would fix itself’, our dishwasher remains stubbornly broken (it must be about a year since it broke). It reports an intake/drain problem which is usually a stuck impeller (per Miele), but in this case is not. The impeller moves just fine, and weirdly it will do a rinse/drain cycle, but not a wash cycle. I’m not hugely looking forward to tackling that repair; but after nearly a year without I’m starting to feel somewhat peeved about it, so I guess that’s an up-and-coming activity. Also, once it’s working I might be more inclined to put the kick plates on the kitchen cabinets, which is another job just lurking there.