With the impending potential for either an overt fascist dictatorship to be in power in the US, or the democrats who will continue to be the centre-possibly-slightly-left and need SO MUCH PUSHING to get decent things done* alternative (but who many republicans seem to think are the reincarnation of a combo of Stalin, Lenin and Castro), I have to say my brain is reaching its capacity for existential angst.

And with it has come a resurgence of interest in some of my old hobbies. I think because I want something can have control over, and something that I can do with a tangible outcome. So little feels under any kind of control right now; and there is a degree of (very privileged, I admit) mental frustration at the fact that we’ve worked so very f’king hard on this house for 3 years, and it’s finally getting near to completion and we might have to leave.

As in, if that nectarine nazi is “re-elected” (for very small values of “re-elected”, given that he lost the popular vote last time and the republican party are doing everything possible to suppress votes stack the deck in favour of their amoral candidate this time) we will be leaving. How rapidly depends on how quickly things degenerate. And where we go to is still up in the air. Brexit has screwed the pooch on us moving where we’d like to go, unless by some miracle we can leave and be in Portugal by the end of December. And given we won’t know the outcome of the election for a while and it’s in the middle of November, that seems an unlikely course of events.

But the house is not done.

And it’s all internal pressure; it’s all in my head; but I feel like I have to keep pushing and pushing to try and get the whole house finished. Never mind how tired and fed up of working on it I am. Never mind that it’s unrealistic and impossible to imagine it being done by the end of the year, let alone by November 11th. Never mind that we took all of 20 minutes for ourselves yesterday, for our mental health (to watch Woke – which is excellent, btw). I’m still trying to take one day a week not to work on the house or be at work, but I am starting to feel the unyeilding pressure of events making me think I need to just work.

Which ironically leads me to find myself hunting for things I can fix… Which is made slightly more difficult by the fact that I don’t have a workbench, the actual time to invest in these projects, and a bunch of the stuff that would be useful is in storage. And also by the fact that a lot of the things I might need have to be shipped. So then I end up with an incomplete project waiting for bits to arrive which doesn’t fulfill my modern zero-wait-time zero-patience need for entertainment (see: bench multimeter (waiting batteries and holders), bench power supply (waiting switch), Dyson fan (waiting various components)); which leads to stupidity like buying a first generation, broken CD-player: 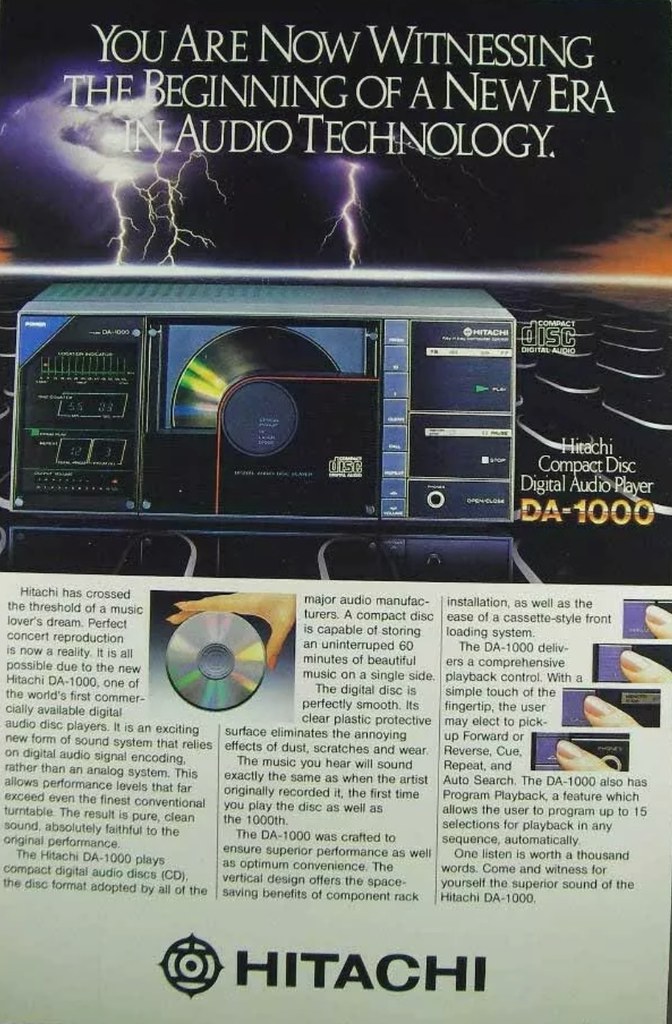 I have wanted a CD player for a while. We rarely buy CDs but occasionally we do, and I still have this vision of actually having the vinyl and the CDs in some sort of nice organisation, rather than still in boxes.

But anyhow; I’ve not wanted to spend on something I wasn’t that excited by. I mean, CD-players are kinda blah overall. Functional but not super interesting. But then I saw the first generation, motorized, vertical loading CD players and… well. I remember my dad getting a ridiculously expensive Marantz CD player back in about 1987 and it was insanely cool. But it wasn’t vertical-slot loading. But this thing is from 1983! It is ridiculous.

Aaaaand, of course, to fix it, I will undoubtably need stuff that comes from abroad. The belt (I’ve preordered that because it almost certainly needs replacing) is coming from Germany, and the companies that offer pre-made up kits of capacitors? Also in Germany.

Also, irritatingly, I’ve realised that unless it’s the R-variant (later, slightly extended dynamic range, the photo doesn’t show enough of the back to be sure); the service manual appears to only be available for free in German. Mein Deutche er nicht ser gut. I mean, I had (have?) a full and complete photocopy of the German MZ ETZ’s technical manual. Butttttt it had lots of pictures.

Hopefully I can fix it :)

Anyway. Today I need to get on with cutting bits of wood. So I’m going to go do that, and wait for something to arrive in the hopes that I might be able to fix something. It probably won’t really make me feel better, but like the bits of time when I’m scooping up poo from the chickens, it stops me thinking about the hideous human rights abuses, and the social progress being undone by people who think that the only people who should get to do anything are cis-het-white-men. And stops me worrying for a few minutes here and there about having to leave the home we worked so hard on before we get to enjoy it.

* to paraphrase the thing I saw a while ago, imagine sitting down in a restaurant and the wait staff arrive and say “Well, you can have this pile of mixed ground glass and shit, or a somewhat dull sandwich”