So, after about two years I’ve finally built my keyboard. By which I mean, from a pile of keys and a circuit board and a case, and some keycaps I’ve assembled it. 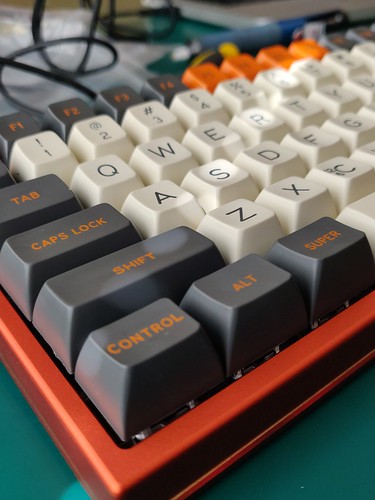 It’s not quite my dad’s first keyboard which he wirewrapped and built by hand. But it’s nice to type on something that I know is mine. It’s a bit more clattery than the mac’s keyboard – I could get some little rings to stop the clatter, but it makes me feel quite…nostalgic.

It’s still missing…err… 6 keycaps. That’s because when I ordered the keycaps I wasn’t 100% sure what layout I wanted. When I did decide it was too late to order the rest (because it was a massdrop run). I’m waiting (optimistically) for them to do another run – because I really like the look of the keyboard, but I’ve got two keytops with the wrong slope (Page Up / Page Down) and I’ve had to use blanks for Control / Alt / Cmd on the bottom row because I wanted a different size than is in my keycap set.

It does feel nice though. Now we just need to finish the house and then I’ll build the desktop that’s going to replace my aged (10 year old) laptop (which today let out a confusing and unpleasant wailing noise). And hopefully that’ll have the dual benefit of having a machine with a bit of umph, and also having getting me to stop dinking quite so much.

It’s been nice though – I broke out my Solder / SMD rework station (unnecessary, really, but it’s the only USian soldering iron I have).

I’m also working on upgrading the media server to a new harddisk and a new OS. Because that’s a relaxing thing to do the day after my colonoscopy*.

Anyhow, I should get back to it… and tidy up the 800 boxes I’ve got out to make today happen so far.

* Benign polyps, they think. But it left me with a need to be near a loo today. Which I’m thankful that I realised before I left for the house for the day.