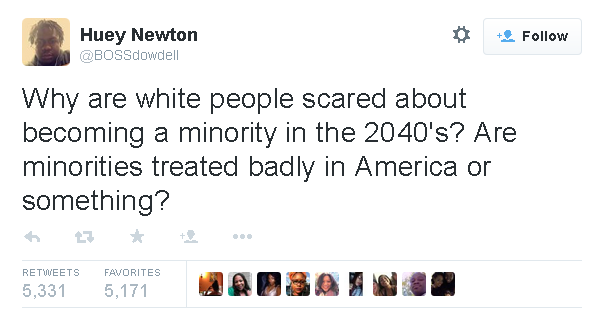 (The Grio)The incident reportedly took place this weekend in McKinney,
Texas – where a resident was having a pool party. Allegedly, neighbors
were concerned about the large group of black children who were in
attendance at the event, and called the police to intervene.

Authorities arrived immediately to the predominately white neighborhood
and proceeded to chase and handcuff the frightened partygoers without
providing much information as to why.

At one point in the clip, an officer can be seen pinning a young girl in
a bathing suit facedown into the grass while grabbing her by her
braids. She and her friends hysterically scream as she is cuffed. The
adults in the neighborhood are seen helplessly watching on as the girl
sobs.

All throughout the clip several detained young boys try to explain to
the police that they just arrived to the scene and were not involved in
whatever complaints had been made. They also appear confused as to why
they have been cuffed. The video ends with the officer chastising the
boys for “being part of the mob.”

All of these cops literally disgust me. Anybody that abuses their power should be stripped of it and anybody that inflates their power by belittling others deserves to be thrown in jail theirselves.

Listen to him yell “get your asses on the ground”…. What right does he have? Could you imagine a doctor calling a patient of theirs a piece of shit? The power they have is supremely more great than that of a COP. Like sit your ass own filthy ass down.