Washed the enormous quantities of pollen from both our (running) cars.

Finally fixed the driver’s side floor mat down in the Rav (replacing the missing floor mat retaining clip hole reinforcer and the actual missing clip).

Sorted post that arrived while we were on holiday.

Started to make an exciting list of activities for me to do tomorrow (transfer money, pay *more bills*, book Rav in for brake pad change).

In less productive news – I tried to set up my keyboard (the nice shiny tenkeyless one) – and realized the keycap set I got is missing the 1.75 or 1.5ish size keys I need for the layout I was intending. Not sure how I missed this (I think I largely missed it because it’s $50 for the missing fricking keys). Of course, I got the T0mbr3y SA Carbon keycap set which means I now need to either wait for it to hit production again or get a non-matching key for the missing shift key (and non-matching keys for the ALT/CTRL keys, too).

Oh, and there’s one other one – I think page-up where the key angle is wrong, so that also needs a different key.

I mean, it’s lovely – it feels super nice, but now I need to work out what I should do in the mean time. Not that I have a computer to use it with.

Though I’ve just looked at another keycap set and I’m wondering if I can tweak mine to work. Hrm. Ponderence.

Anyhow, now I need to go do some filing. Then reading and washing up. Yes.

We had a nice holiday in Europe.

More? That’s a bit challenging. First up there’s the mechanical aspects of the holiday. We flew over to London (on Norwegian Air, would recommend), f’cked up and got a tube, then had to change tubes at least once to get to St Pancras (turns out there’s a Thameslink service direct from Gatwick, doh!), then got to the Eurostar terminal. We troddled across to Paris.

And we then, a few days later got back on the Eurostar (bonus upgrade because we were cancelled and rebooked – business class!), got back to London, Tube’d it to our hire car place and drove to the Lake District. Then we drove down to Bristol. Then to Cornwall. Then back to London and flew home.

Then there’s the pretty.

I’m not going to make you sit through 200 photos. But here’s a link to them.

It was wonderful to get back to Europe, see some of our friends, spend some time with my mum and her partner. Sadly, thanks to the SNCF strike we missed seeing my sister, which is a real shame. We’ll have not seen her / fam for about 2 years by the time we get back over there. Maybe.

There are some things though that stick with me – and which made me very thoughtful while we were over there. The first of which is how profoundly I miss Europe. I can’t really explain why. Some of it is the built environment, certainly. I understand that there is history here going back as far as there is in Europe. And there are, I am aware, marks on the environment left by the civilisations that historically lived in these places, before Europeans popped over for a bit of fun genocide.

I understand that, but the transformative nature of the culture in the various places I’ve been in Europe and the casual nature of ‘oh, this is 400 years old and in the street’. I miss that. 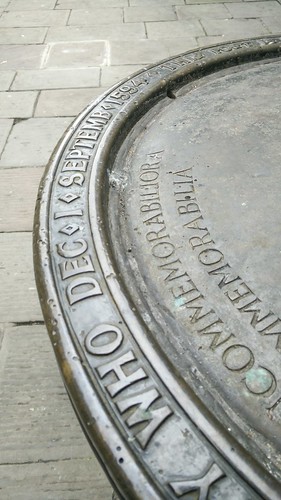 And I miss the built environment. Which is part and parcel of the same thing, I suppose. I miss the way that you’re enveloped by buildings, they wrap you and cocoon you in a way that nothing I’ve seen (on the west coast at least, nor from my memory of Toronto, which is my only East Coast North American city) does. The narrow streets were built for people, not for cars. And while the traffic was tedious in the moments we were driving, the cities are walkable in a way that I’d forgotten about. In Paris we travelled on the Metro and à pied, and I never missed our car.

I did miss a lift (it was a sixth floor walk-up). But Paris is a city I’d actually like to live in. Curiously, London did not impart that feeling (it never has, I’ve thought it would be technically interesting to live there, but never had a huge desire to do so). I’d never really thought of Paris as a place to live before, but during this visit it felt like a place I/we could be. Which is novel. Perhaps it’s a childhood thing – but then I spent a lot more time in London as a kid. Paris is different in a way I can’t quite put my finger on.

And the Lake District. Were it not for the many factors that practically prevent it, and for the casual ongoing destruction of the NHS and the appalling treatment of migrants, and Brexit (and, and, and), the Lake District would be home. Just being there is a balm for my psyche in a way I really can’t explain. I guess it’s related to spending so many holidays in the Lakes, and the fact that while much of school was miserable and painful, holidays on the mountains were places of total escape. When I was finally contemplating coming out to friends – I went with a friend to the Lake District for a (astonishingly wet*) weekend. We spent the weekend walking, and while I didn’t come out to her there and then, it was the thing that got the ball rolling.

I also miss universal healthcare. We watched some of Hospital, a BBC series that’s following staff in an NHS hospital (Queen’s Medical Centre). While it was painful to watch – in that I remember that kind of stress, that kind of near despair, the highs of saving a life tempered by the incredible challenges of working in a system that’s being strangled by a government that wants it to fail – it also reminded me that you don’t get a bill at the end. That this ridiculous f’kin ‘system’ in the US is cruel and heartless. That the people of the US have chosen to implement non-universal healthcare in a way that’s damaging to the individual, and which has a lack of empathy for those in pain and who are sick continues to astonish me. Because most of the people here seem warm and generous.

But I can’t imagine… just simply cannot imagine having a sick family member here. The thought of having to worry not only about the life of a loved one, but also about whether you’ll be bankrupt and/or homeless at the end of it? It’s profoundly ethically wrong.

That I’m a part of that makes me deeply uncomfortable.

But that’s where we are right now.

And then there’s food.

I am not sure whether it’s the extra exercise, or the lack of preservatives, or the amount of processing, (or less stress, or a combination of all three (probably)) but I can eat food way more comfortably in Europe. More so in France than in England. Which would tie in with my previous experience that food lasted less long on the continent than it did in the UK – probably due to the use of different / fewer preservatives**.

But I could merrily drink milk-based coffee drinks (oh, lord, I miss the flat white. I tried getting one made here and it was hideous, and I’ve never had the nerve to try again. Apparently you can actually get them at Starbucks here, but I’m not a huge fan of Starbucks anyhow). Over here, I quite often get a bit uncomfortable after a couple of coffees. Not enough to stop me drinking them, but enough that I’m a bit wary.

But particularly wheat – which here sometimes bothers me and makes me bloated – not so in Europe. We ate super rich food in Paris and both of us seemed not to have the digestive issues we’ve both had in the US.

Some of that is undoubtably the reduced stress (having arrived back I woke up at 5 (jet-lag) which was then followed by a tedious hour of my brain hashing things out about our house). But some of it is, I suspect, down to the food.

Which leads me to an uncertainty about the future. It’s not like we can do anything about it right now. We have a house that’s in bits, land that we need to sell, and we want to adopt. But it puts many things to think about in my little brain.

All in all, though, it was a nice holiday.

* We slept in the car having cooked dinner in the tent – mainly because the tent was at risk of blowing away.

** I still am utterly freaked out by how long food lasts here. Stuff that I think should be rotting and thrown away is fine. It’s very, very disturbing.