I imagine whoever came up with the 1030am – 1245 training concept works somewhere not-ER based. I say this because the chances of me ‘just nipping out’ for 2 hours of training on a work day are so laughably minimal that they don’t even bear considering. So instead I scheduled my mandatory training for a day off. Which is how I spent today, or at least, lunch time today.

Of course to achieve this I had to cycle for 35 minutes in to town, and another 35 back out, almost at the hottest part of the day in a heatwave. Which has kinda meant that the rest of the day is not-so-useful. But I was a bit concerned because I did think that cycling through the sun, and more especially the vicious evil pollen might present a problem for me – and this is the real purpose of this meander. See, I have recently bought a neti pot. This, for those not in the know, is a thing which you fill with sterile saline solution and then use to irrigate your nose.

Having checked various articles and entertaining videos on the matter, with phrases like “generally well tolerated” I gave in and got one. And I have to say – and bear in mind this is entirely subjective it does seem to work. It’s hard to give a really accurate assessment because the weather is dramatically different today to how it was a four days ago. But over the last few days I’ve been using the neti pot and my allergies are much, much better. 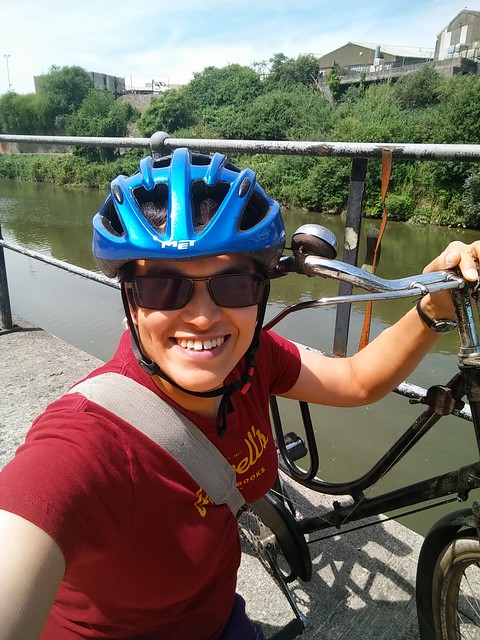 I’m still lugging around tissues with me, and being able to lay down to sleep is variable, but it does seem to be helping.

That said there are a few things I’ve learned:
– Cold saline is no where near as effective, nor as pleasant as warm
– Overly salty saline is also phenomenally unpleasant

The experience as a whole I’d liken to the hideous feeling you get when you accidentally get water up your nose whilst swimming. I can’t say I enjoy it in any way. Sometimes I get a good flush where it’s not uncomfortable, but sometimes it really is unpleasant. But for me, with such spectacularly lousy allergies (as in barely able to breathe, constantly blocked nose, getting nose-bleeds from blowing my nose so much) – it’s worth it.

Hence the (rare) selfie. I cycled home and yes, my eyes were itchy, but I don’t think I sneezed once whilst I was cycling, and even now I’m a bit snotty, but no-where near where I was a week ago. So yay.

I use the squirt-bottle version, which lets you use a bit of pressure and not tip your head back. I’d say it certainly helps in a palliative way – no idea if it helps further, or at least, no idea if it helps more than ‘being able to breathe enough to sleep’.

ALSO! I JUST found out there are prescription allergy eye drops, and they really do seem to work!! o/ It’s Pataday, here – not sure what the generic name is ‘cause I threw away the box, but the optometrist gave me the sample bottle and now my eyes only itch a little bit, and not until evening. Whoohoo!

(That was a funny eye doc appointment, btw – he gave me allergy stuff but no new contact prescription, and told me the visit was “To be continued!” in a TV voice. Apparently ‘better’ for my severely irritated eyes still looked pretty damn irritated to him.).

I’ve got some OTC* eyedrops (normally I get sodium cromoglicate, but this month I’ve got some other random one that stings like crazy when I put it in, but works really well afterwards, ‘cos they were out of my normal super-cheap stuff). Problem is, they sting like crazy when I put them in… which means I’m loathe to put them in unless my eyes are actually bothering me.

*Over the counter. Is that a semi-universal term for non prescription meds?