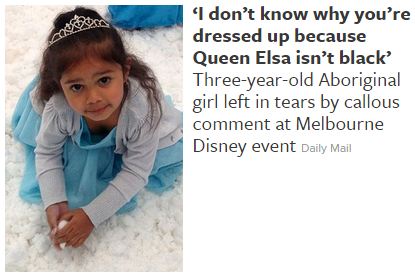 I AM SO BLOODY FURIOUS:

This is why people who seem to need “proof from history” that WE NEED MORE DIVERSE REPRESENTATION IN FANTASY piss me off so much. People of color get harassed at Renaissance Faires, at SCA events, in online fandoms, at LARPs, and events based entirely on fantasy and fairy tale stories, because supposedly “there were no PoC back then”.

That’s a lie, and it’s wrapped in another lie.

Despite that fact that Disney’s Frozen has nothing to do with actual history, people still have asked me over and over again about it. Because they want “proof” that it should have been more diverse.

I really don’t get why anyone would need any more “proof” than the fact that a 3 year old child was told “Black is ugly” at a Disney event because she was dressed as Elsa.

I really wonder if things would change if Frozen really had been based on media from historical Denmark, as a lot of the mistaken “historical accuracy” police had claimed it was. Maybe then people would have seen someone in Frozen, maybe even Elsa, who looked like Karel Van Mander III’s Queen Persina (from a series for the Royal Court in the 1600s):

[The models for this series were Black people living in Denmark in the 1600s, if anyone was wondering.]

But it’s not set in historical Denmark, or Norway, or “somewhere in Scandinavia”. It’s set in a 100% make-believe world with magic ice powers and sentient snowmen.

And we need it now.