So, one thing I’ve not talked about loads is the garden. We’ve worked bloody hard on transforming an unloved, uncared for patch of barely alive grass and dandelions into something that’s not only giving to us, but is adding to the biodiversity, and providing food for (some) wildlife. I mean, it would provide food for more wildlife, but we’d actually like to eat it ourselves, so we’re pretty keen to keep deer out.

It’s one of those things that we seem to do that I’m unsure if it aids in selling – as this is definitely not our forever home we do think about that, but then very little we do is really targeted at selling. I mean, we have an awareness that one day we’d like to sell.

But gardening is something we both seem to be driven to do – and enjoy doing. And trying to improve the land we’re custodians of, and giving wild critters somewhere to be in our generally monoculture (grass) built environments. It’s selfish, too, because we want to grow food, and we want to enjoy pretty flowers, and I love watching the birds and insects fluttering around the place.

But it also has some grounding in trying to make the world a better place.

Anyhow, so back when we moved in the garden at the back was a scrubby patch of grass, three plum trees, a lilac bush (next to the house) and the umbrella tree.

Oh, and there was a thicket of brambles right at the back. Unfortunately, I didn’t think to take a picture before we got our arborist to attack the trees which had clearly had absolutely no maintenance recently, and quite possible for their entire life; and also to hack back the brambles.

You can kinda see them in the background of this picture which was the only picture on the listing when we got the house.

And sometimes the transformation is quite striking.

And it’s amazingly productive. I mean it’s a weird year weather wise (aren’t they all now, HT: Climate change). But we just pulled over 3kg of veg from our garden in one day’s harvest: 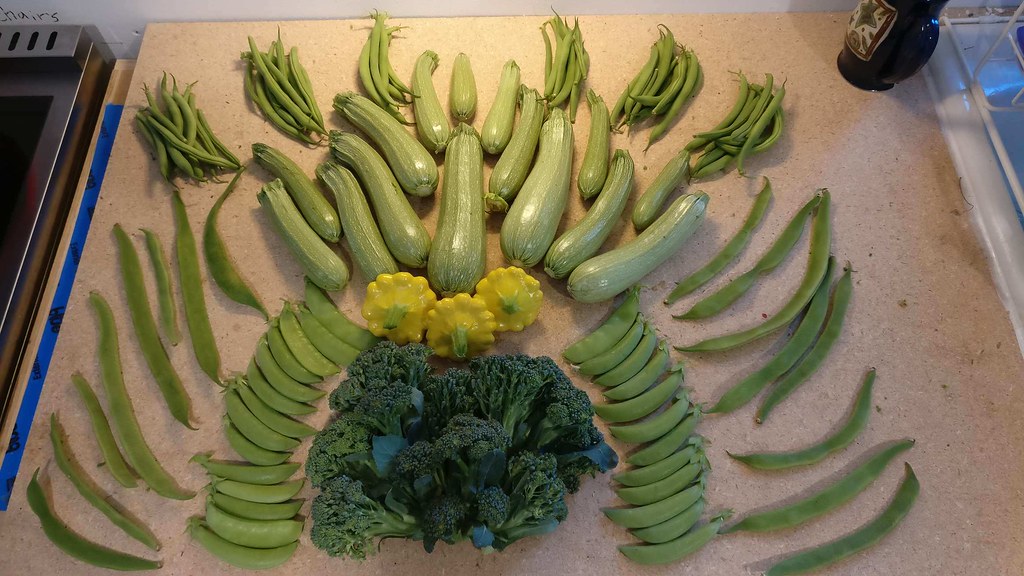 And that’s not hugely unusual. Last week we had something like 30 courgettes. We’ve also had artichokes, broccoli, radish, raspberries, strawberries, peas, beans, a variety of herbs, our tomatoes are setting on the vine and our sweetcorn is growing inches every day; it’s got tassels and silks, so we should actually get corn (Kathryn’s been hand pollinating them). We’ve got Jerusalem Artichokes, cabbages, brussel sprouts, leeks, onions… oh and 2 plums (there may be more? We can only see two… between our three plum trees. I think the birds got them all).

It’s quite joyous watching it grow and delightful to actually get to eat some of it.

We might get some kiwi’s next year, and if we can keep the deer out we’ll get Aronia berries. We might also yet Jostaberries, redcurrants, blackcurrants….