A couple weeks ago The Mary Sue announced they weren’t going to cover “Game of Thrones” any more after yet another female character being brutally raped. The thread is still being invaded by trolls periodically, and there are more than 12,000 comments on the article, which is a site record and probably an internet record. (12K comments because a single website said “We’re not going to recap or promote this show any more.” Baffling.)

Tons of trolls have thrown out the “but THINGS WERE JUST LIKE THAT BACK THEN!” argument ad nauseum. Which is total bullshit, of course. Now with the season finale of “Outlander” (which, spoiler, also included rape) the trolls are coming back.

I just want to ask, why is it whenever producers/directors/writers want to demonstrate “gritty historic realism” it’s ALWAYS RAPE? It’s always sexual violence toward women/girls.

You know what would be gritty historic realism? Dysentery. GoT has battles and armies marching all over the place. You want to show “what things were like back then”? Why aren’t we seeing 500 guys by the side of a road puking and shitting their guts out from drinking contaminated water while the rest of the army straggles along trying to keep going? Or a village getting wiped out by cholera? Or typhus, polio or plague epidemics?

You want to show what it was like back then for women? Show a woman dying of sepsis from an infection she caught while giving birth. Show a woman coping with ruptured ovarian cysts with nobody know what it is. Breast cancer that the audience will recognize immediately but the characters think is some mark of the devil or some shit.

But no, it’s always rape. And we all know why that is. Because these douchecanoes that do this, though they’ll deny it, think rape is sexy. Because they can’t make a modern set story where women get raped in every god damned episode without being called monsters. So they use “but but historical realism!” to cover their sexism (see “Mad Men”) and misogyny. Then they tell us “That’s just how it was back then!” with the clear implication “Shut the fuck up bitch, because that could be you  and you should be thanking me that it’s not.”

Can we propose a rule for “realistic” historical fiction/fantasy? Twelve graphic cases of dysentery for every one graphic rape?

And the worst part about it is that, by their own logic, their argument isn’t even a valid one.  They’re saying that rape is “historically accurate” in Game of Thrones, a show which

So no, there was no “back then” because we can’t go “back” to a “then” that never existed.  And as far as I can find, Westeros is ~12,000 years old.  You wanna make a historically accurate drama set on earth in 10,000 BC, be my guest, but it ain’t gonna look like Game of Thrones.

So when all of the writers for the TV show keep putting rape scenes in the script, they aren’t thinking “yeah, this would’ve been realistic,” they’re thinking “haha let’s see how much I can torture women on this show.”  If the logic you’re using doesn’t even hold up to the thing you’re discussing, you’ve really gotta examine why you’re so enthusiastic about defending rape as a plot device.

Maybe if high fantasy writers and creators weren’t all fucking hacks who’ve been riding JRRT’s dick for the last fifty years and insist on making every single god damn fantasy world they create a boring retread of Middle Earth based on the same three hundred year span of time in four countries of Western Europe they wouldn’t all have to rely on the same garbage logic to justify their garbage misogyny.

You know, they could deny that they find rape sexy, and they might even believe their own denials.  But the point is that they clearly don’t think of rape as something distasteful enough and disgusting enough to omit.

And you know what, I’m not even gonna insist on the dysentery.  Just this: if you’re going to include rape on the basis of historical accuracy, none of your female characters are allowed to have shaved legs or armpits.  And all of your characters have to have terrible teeth – yellowed and worn and crooked, because nobody’s getting braces or regular visits to the dentist – with at least a few teeth blackened or missing for every character over the age of thirty.

Of course, if your reaction to blackened teeth and hairy armpits is “ugh, no, sure it might be historically accurate but it’s gross, nobody’s going to want to watch that" and you don’t have the exact same reaction to rape, you might want to think about why that is. 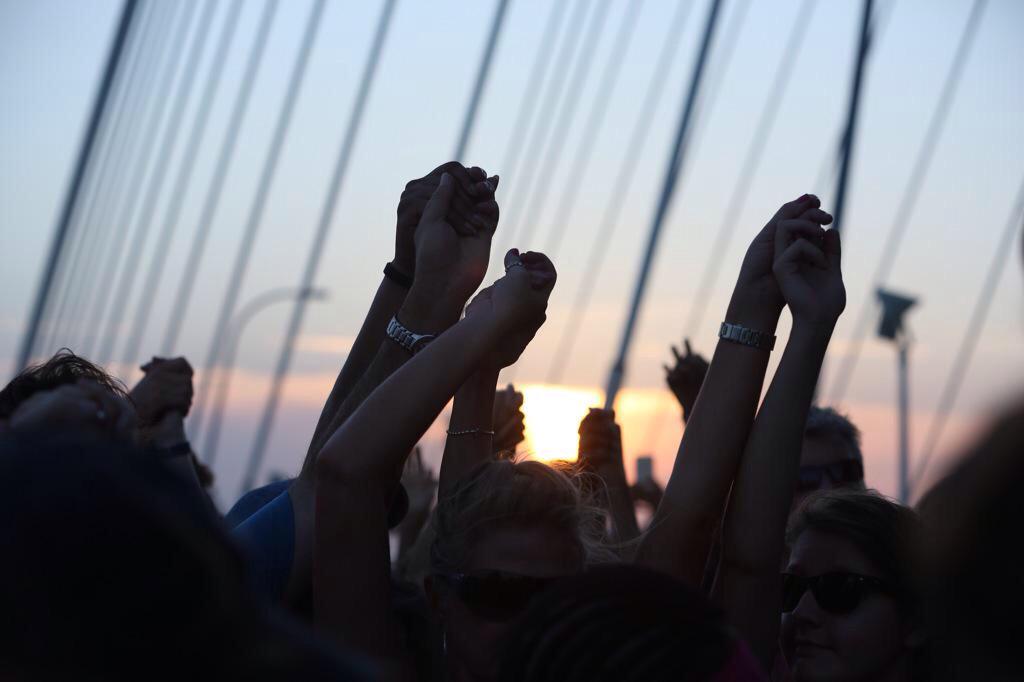 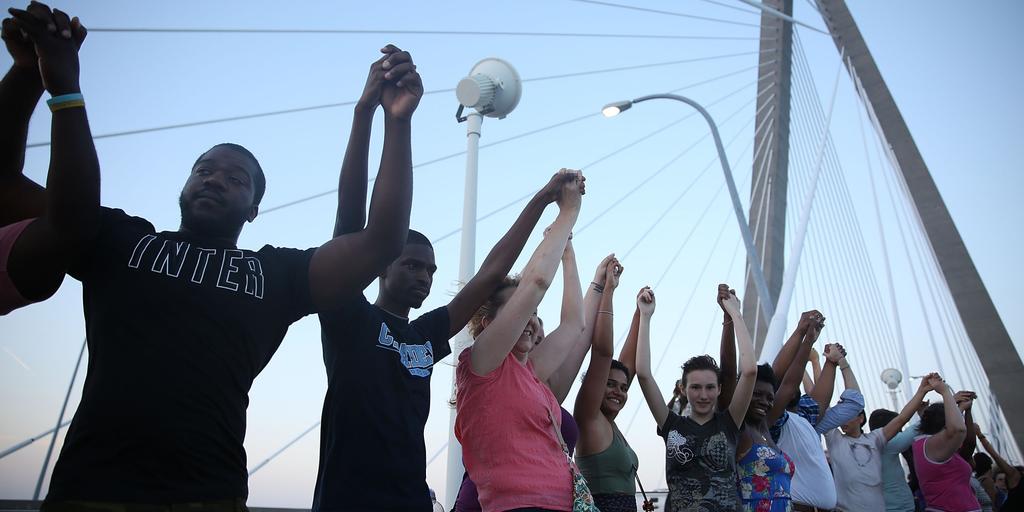 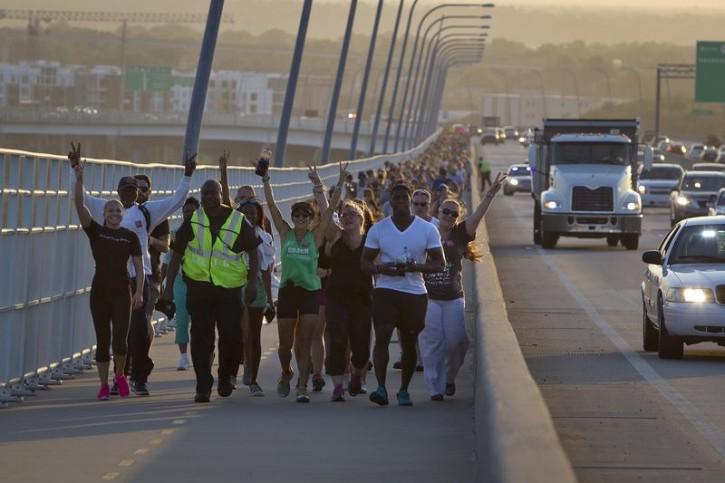 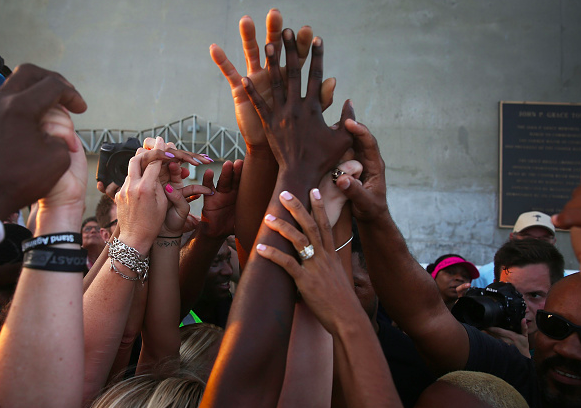 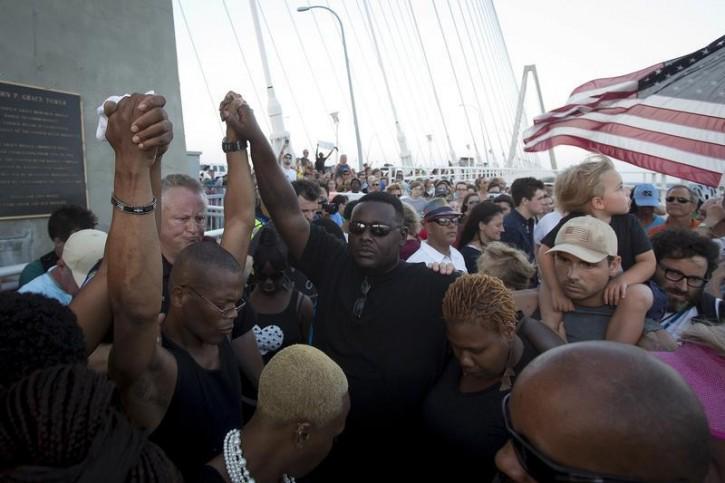 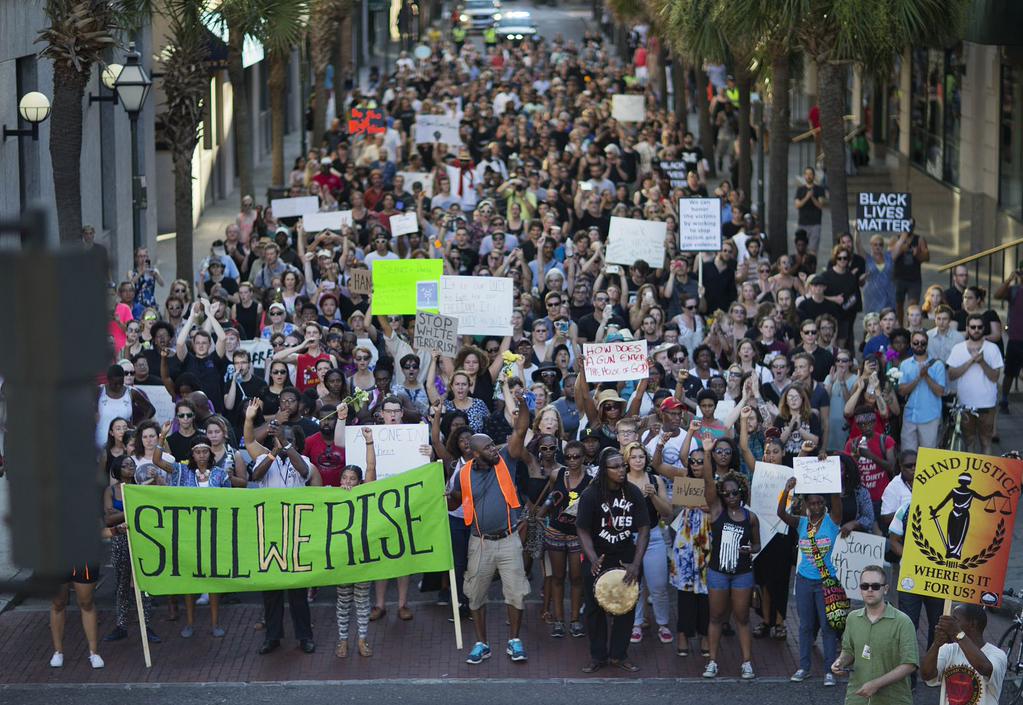 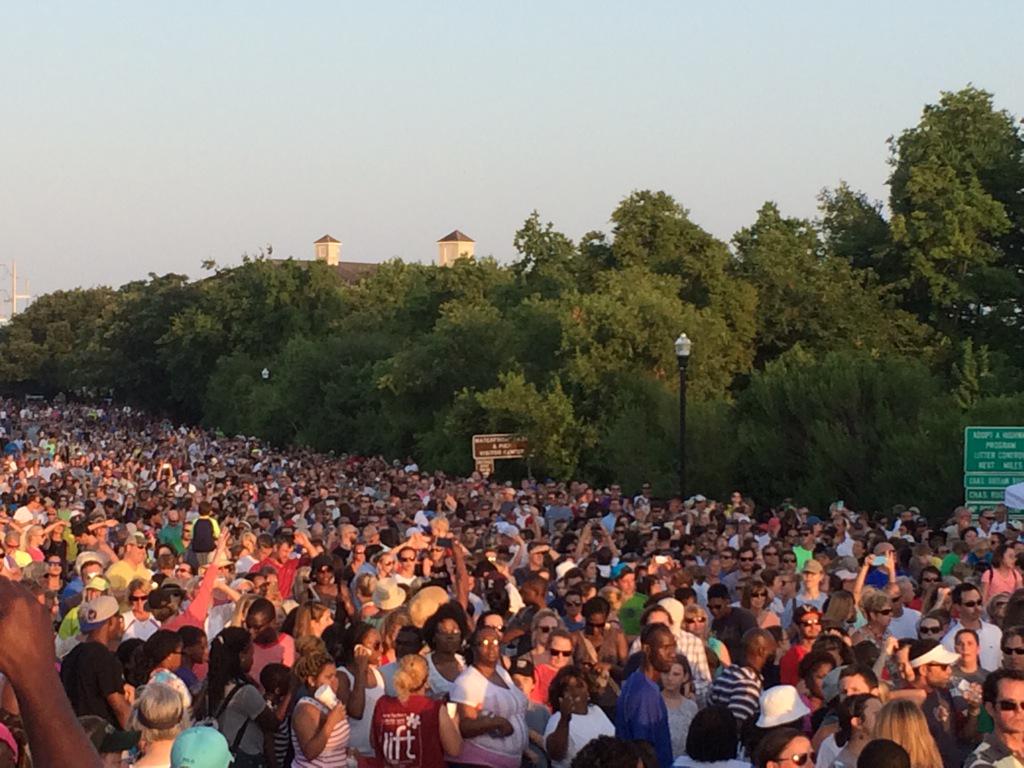 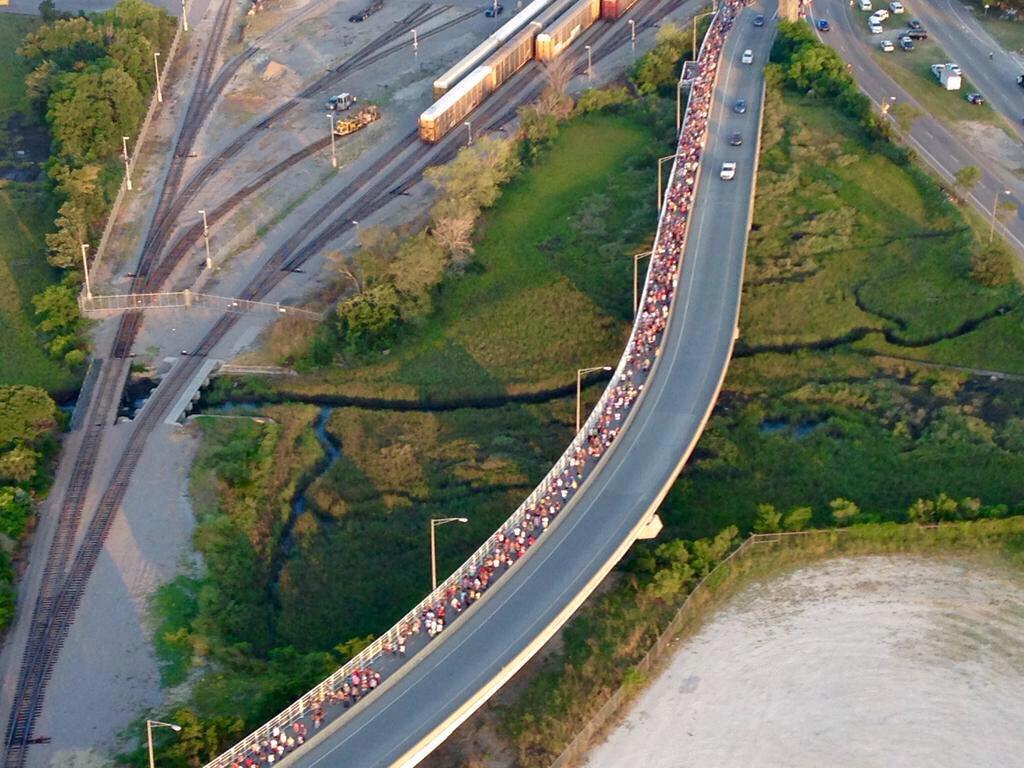 Because news cameras are apparently only there if looting and protests are mentioned, here are some shots from the march for peace in Charleston yesterday. In case you missed it, thousands marched to Ravenel Bridge, holding hands in prayer and unity. Yet this doesn’t make news, but an interview with the killer’s friend does.
all photos from Twitter

this is what people need to see

A
new study of Harvard Business School graduates from HBS’s Robin Ely and
Colleen Ammerman and Hunter College sociologist Pamela Stone shows that
high-achieving women are not meeting the career goals they set for
themselves in their 20s. It’s not because they’re “opting out” of the
workforce when they have kids, but because they’re allowing their
partners’ careers to take precedence over their own.

The study’s
authors interviewed 25,000 men and women who graduated from Harvard
Business School over the past several decades. The male graduates were
much more likely to be in senior management positions and have more
responsibility and more direct reports than their female peers. But why?
It’s not because women are leaving the workforce en masse. The authors
found, definitively, that the “opt-out” explanation is a myth. Among Gen
X and baby boomers they surveyed, only 11 percent of women left the
workforce to be full-time moms. That figure is lower for women of
colour—only 7 percent stopped working. The vast majority (74 percent) of
Gen Xers, women who are currently 32-48 and in the prime of their
child-rearing years, work full time, an average of 52 hours a week.

But
while these women are still working, they are also making more
unexpected sacrifices than their male classmates are. When they
graduated, more than half of male HBS grads said they expected their
careers would take precedence over their partners’. Only 7 percent of
Gen X women and 3 percent of baby boomer women said they expected their
careers to take precedence. Here’s what they did expect: The majority of
women said they assumed they would have egalitarian marriages in which
both spouses’ careers were taken equally seriously.

Of
course, marital arrangements aren’t the only force holding women back.
Part of the reason these women aren’t advancing at the same rate as
their male counterparts is that after they have kids, they get
“mommy-tracked.” In many ways, they’re not considered management
candidates anymore. “They may have been stigmatized for taking advantage
of flex options or reduced schedules, passed over for high-profile
assignments, or removed from projects they once led,” the authors note.
Other studies support these findings, as they have shown that there is a
real, substantial motherhood penalty that involves lower pay and fewer
promotions for women with kids, because employers assume they will be
less dedicated to their jobs (as do, we now know, their husbands).

But
the personal piece of the female achievement gap puzzle is important,
and it’s something that’s very difficult to shift. The study’s authors
note that while millennial HBS grads are a little more egalitarian than
their older peers, half of the youngest men still assume that their
careers will take precedence, and two-thirds of them assume their
spouses will do the majority of child care.

Important info, but I hate the way this was written.

“It’s not because they’re “opting out” of the
workforce when they have kids, but because they’re allowing their
partners’ careers to take precedence over their own.“ but because they have self-indulgent patriarchal male partners that encourage and expect them to give up their career dreams in favor of catering to their families, something the men themselves are too self-entitled and lazy to do.

Also big shoutout to all those millennial male HBS grads that are still patriarchal and entitled. And by shoutout I mean fuck you.

we could also talk about how hormonal patterns for XX persons can naturally and biologically mirror that of a typical XY person, or vis versa, which gives rise to things like androgen insensitivity disorder. here u have it, folks, an whole group of intersex people who have XY chromosomes and testicles and vulva and vagina, all grown naturally, all at the same time.

seriously consider the bold if you are aggressively upholding the ridiculously flawed theory that is the sex and gender binary.