So, I think I’m going to blame it on the night shifts; that and the allergy season which appears to have kicked off in spectacular style this year. But whatever the reason I’m knackered today. Completely cream-crackered.

I had hoped to get *lots* done today, but have largely abandoned it in favour of watching Sense8 (difficult with the representation of minorities: YAY! for representation, boo for dear-god-stereotype-much?! Still loving lots of it though).

However – on the plus side I have put the final coat of paint on the boxing: 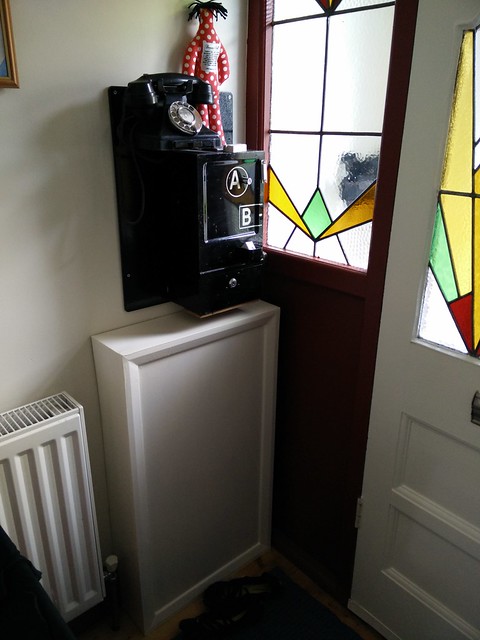 And I’ve also declared the stair rail done, and semi-attached the last of the three (butt ugly) brackets that hold it to the wall (at a different level to the one opposite. Why didn’t I just remove the damn thing? and the edge of the front door has met my ‘good enough’ criteria. It could do with another coat or two, but you don’t really see it, so I say it’s ‘good enough’.

We’ve also got a repair engineer coming to fix the Haier Washer-Drier (I just like the way that sounds). Fixed fee – covers call out, labour, all spares and a year’s warranty. It should be okay – so I’ve cleared the laundry room ready. Which involved moving all the tiling stuff for the floor that I’ve not yet tiled. I’ve also taken a photo of the poor sad object:

The string’s to hold the (broken) drawer shut – it tends to pop open when it’s spinning which has led to water on the floor syndrome (but not since the application of ‘string’. Oh no). The other thing you can just see is the peg sticking out which is doing the job of the missing foot. Hopefully the repair-bloke (it is a bloke, or at least the person is called Keith) will fix the ‘leaving nasty stains on things’ fault and maybe some of the other faults. I’m thinking, though, that I might make a false floor that’s actually level when I get to tiling the laundry room. That plus multiple screws to the walls, the existing floor, etc, might make the poor benighted object less inclined to shake itself to bits.

Finally, in my catalogue of activities for the day I took my poor bicycle down to a local place that hopes to be able to repair the broken brake linkage*. Failing that it may be a model-it and send it off to be milled. It’s actually just a bit of bent metal that’s snapped, but it’s beyond my making abilities. I’ve also been re-re-re-redirected to someone who might be able to repair the BSA three speed hub. Which is exciting. It’s probably advisable to get that repaired before leaving the UKland because whilst BSA hubs are rare here, they’re probably hens-teeth-rare in the US.

Mind you, having checked the status of my application for registration again it’s frustratingly still listed as ‘awaiting documents’. GET OVER THERE ALREADY, JEEZE.

* Did I mention this? No? On my last night shift I pulled out of the garage and started cycling, pulled the brake lever and discovered a complete absence of retardation. Now, lets be fair, my bike’s brakes are never highly effective, but this was a ‘oh, nothing is happening’ moment. Fortunately, the less-than-adequate front brake brought me to a stop – and doubly fortunately I’d not made it out onto the junction with the main road which would, I think, have been somewhat more exciting.