Yes, yes, as usual caveat reader – I’ve been awake (bar a 2 hour lie down during which I vaguely slept) for around 35 hours. Aren’t nights fun. Oh, no, they suck.

Anyhow, there was a bit of angst yesterday – well, the night before. The licensure office in WA sent an e-mail saying (very politely) “Your application is missing bits, so uh, we can’t process it”. Having had to do the rather specific sacrificial dance to obtain the cheque that I’d had to send I was not overly delighted at the prospect of having to obtain a new one (and the additional cost wouldn’t hugely help). But having had a quick e-maily chat with them – they’re holding the application ready for the CGFNS assessment of my transcripts. Neither of the letters appear to have actually arrived there yet (the earliest left the UK around the 26th May – so it’s not entirely surprising).

Also, the camera situation left me a little dissatisfied. After a bit of pondering I’ve sucked it up and bought a Lumix G2 with a new 14-42mm lens. I’d’ve liked a better, more interesting lens. But that’s what I’ve got available.

The reason for the camera upgrade is that I wish to do some video recording. Kathryn and I have store-related-plans which call for being able to make some videos. The Lumix G2 adds in 720p capture with image stabilisation. It’s hardly cutting edge tech, but it is good enough for podcasting outside. Some stuff will obviously be captured with the vastly superior 4k capabilities of the OnePlus, which is also much more easily grabbable. But the Lumix offers niceties like control over depth of field, optical zoom, the option to use other lenses…

We’re going to be holidaying in Norway this year, possibly also in Sweden and Denmark, and travelling through Germany and the Netherlands. So we’ll have a chance to play with it…

I just learned of a medieval counterpart to the modern Magic 8-Ball and the pulling flower petals “He loves me not” thing.

I thought it was a joke, but apparently people actually did this – reading the number of holes / patterns of mold etc like other fortune-tellers read tea leaves.

Also, young’uns would try to discover the name of their future spouse by writing potential names on different pieces of cheese, and the one that grew mold first was considered right.

And people would ask general questions of the cheese, write possible answers on pieces, then put them all in a cage with a hungry mouse, and whichever was eaten first was true.

…None of this should surprise me, since it fits in with other things that humanity has done to Find Answers From Chaos, but somehow cheese lacks dignity.

(That and the fact that “tyromancy” sounds like the magic of kings, or maybe the magical control of T-rexes.)

What do you mean, ‘Cheese lacks dignity’. Of all the dairy products, cheese is without doubt the most dignified. And telling the future from cheese? It makes complete sense to me. 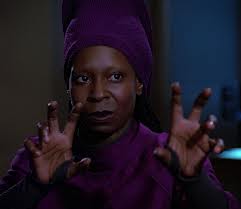 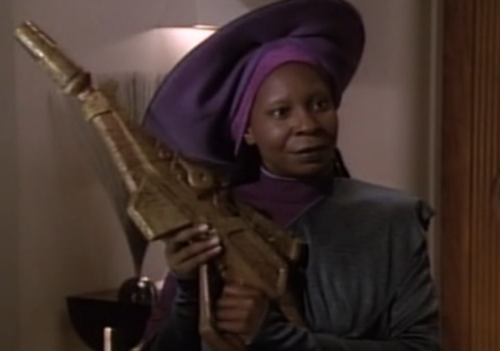 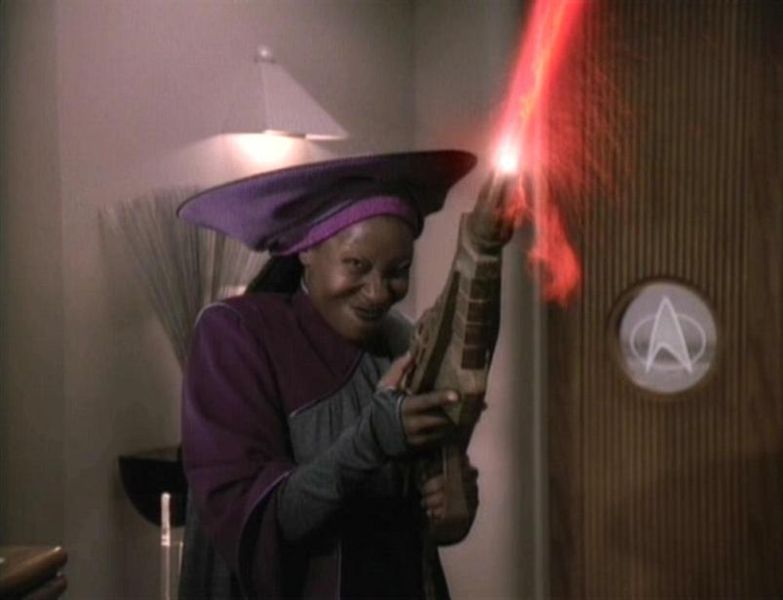 Nichelle Nichols (Uhura on the original series):”Whoopi Goldberg, she’s just marvellous. I had no way of knowing that she was a Star Trek fan. When I finally met her it was her first year on the Next Generation.

And so they finally asked, and they had the same reaction at Star Trek office, specifically Gene. And she said, ‘I want to meet him and I want him to tell me to my face. If he tells me he doesn’t want me and why, I’ll be fine.’

Knowing Gene he had to take that challenge, and so he met with her. She said, ‘I just wanted you to tell me why you don’t want me in Star Trek.’

And she looked at him and she said, ‘Well, it’s all Nichelle Nichols’ fault.’

That threw him, he said, ‘What do you mean?’

She said, ‘Well when I was nine years old Star Trek came on,’ and she said, ‘I looked at it and I went screaming through the house, “Come here, mum, everybody, come quick, come quick, there’s a black lady on television and she ain’t no maid!”’ And she said, ‘I knew right then and there I could be anything I wanted to be, and I want to be on Star Trek.’

I know I’ve reblogged this before, and I will undoubtedly do it again.

It matters. And no amount of saying that we’re post-racial or that racism isn’t a thing or that “they just chose the best actor for the role” or otherwise trying to cover up for it will make it okay to keep relegating actors of color to secondary roles, villain roles, stereotyped roles, or no roles at all, and it sure as hell won’t make it okay to keep whitewashing CHARACTERS of color out of the story by casting white actors to play then.

I said “Dr. King, thank you so much. I really am going to miss my co-stars.” He said, dead serious, “What are you talking about?” I said, “I’m leaving Star Trek,” He said, “You cannot. You cannot!”

I was taken aback. He said, “Don’t you understand what this man has achieved? For the first time on television we will be seen as we should be seen every day – as intelligent, quality, beautiful people who can sing, dance, but who can also go into space, who can be lawyers, who can be teachers, who can be professors, and yet you don’t see it on television – until now….”

I could say nothing, I just stood there realizing every word that he was saying was the truth. He said, “Gene Roddenberry has opened a door for the world to see us. If you leave, that door can be closed because, you see, your role is not a Black role, and it’s not a female role, he can fill it with anything, including an alien.”

At that moment, the world tilted for me. I knew then that I was something else and that the world was not the same. That’s all I could think of, everything that Dr. King had said:  The world sees us for the first time as we should be seen.

It matters, man. It honestly does. It mattered then and it still matters.

Some great anecdotes which bear much repeating.

This is why I get mad when I’m told that it should be enough that the author explains it after the fact. No. A child should be able to look at the screen and see themselves. Without commentary, without explanation (other than the obvious b/c children need to learn), without ambiguity. Representation isn’t “oh yeah, they released that information in an interview 6 years later”. It’s this. Right here.

I have no use for these gifs, but share them for their General awesomeicity.